On the road to nowhere.

I recently travelled to Worland to visit the family and help prepare for the closure of the family business. While the trip can be long and boring, I decided to make the best of it. So, I stopped often on the road to nowhere just for the experiences.

If you’ve travelled through central Wyoming in wintertime, you’re likely familiar with South Pass. In the winter it can be treacherous, even closed due to snow and wind. I planned a trip to Wyoming in April but had to cancel because the pass was closed for three days.

But in May, with wild flowers blooming and mountainsides greening, South Pass was beautiful and dramatic. At about the highest point of the pass, you can take a 10-mile detour to South Pass City. This mining town hit its heyday in the latter part of the 19th century and was largely inhabited until the early part of the 20th century when the town achieved ghost-town status. 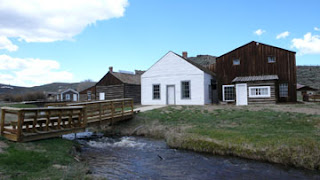 Now, as a Wyoming State Historic Site, visitors are once again welcome to town, which now boasts a population of “about 7.” The best time to visit is from mid-May into September, when the town is officially open, allowing entrance to many of the buildings and talks with the “locals.”

During my visit, in what seemed like a set for a television commercial, the local UPS truck showed up for a delivery. I would have preferred the stage coach or at the very least a Pony Express rider.

South Pass City isn’t the only thing to see on the 10-mile detour. Atlantic City is just a short drive away and also shares a mining history. The town is still home to a local population with a strange sense of humor. I was actually mooned by a local while driving through town.

It may not be worth taking a trip just to see South Pass City. But if you’re already in the neighborhood, the detour is worth the time.
Posted by Jeff at 9:26 AM