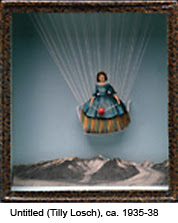 I’m not sure how SFMOMA is able to cram so much stuff into a museum that’s smaller than many. But in my couple of hours at the museum, I spent most of my time viewing Eliasson and Wall. However I did take about 15 minutes to walk through the Joseph Cornell exhibit. Let me start by saying that if I get a full day in San Francisco any time soon, at least half of it will be spent at this exhibit. You can’t imagine what’s on display.

Cornell’s work is wondrous; box after box of images that make you ask, what was going on when he did that. I was surprised at how the artistic traditions of the early 20th century, from Duchamp to Magritte to Dali, were somehow re-imagined in Cornell’s boxes. The art gathers and juxtaposes not just trinkets and tools, but also ideas and philosophies that draw you into a world where emotions duke it out with visuals.

Maybe most surprising, these works from the mid 20th century seemed to accomplish something Photoshop seldom accomplishes—the mash-up of images into new ideas. Sure Joseph Cornell comes across as a little crazy. But as I’ve said before, when it comes to art I don’t mind a touch o’ the crazy.
Posted by Jeff at 12:40 PM