What do you do when you’re in Wyoming for Thanksgiving? Go shooting, of course. I’ll admit, guns scare me and I really don’t understand their allure. Guns are outside my comfort zone. But this Thanksgiving forced me to confront my fears.

Normally, I would skip a shooting excursion. But my dad and my 15-year-old niece Maggie were so excited about the idea of me with a gun that I didn’t want to disappoint. Plus, Maggie just got her learners permit so she was driving—how can you pass up an adventure that involves teen drivers and guns?!

We all loaded into the Suburban and headed out to Uncle Bob’s farm and his personal shooting range. (Yes, I have an Uncle Bob who owns a farm on which he has installed his own makeshift shooting range.) There we met Uncle Bob, other relatives, and friends for an afternoon of guns.

The talk at the shooting range? The gun-ownership disaster that is Barack Obama. Jokes about how to avoid surrendering your weaponry to the new liberal administration were popular including statements like, “I gave all my guns to Scott” or “I threw my guns in the river.” I’ll be surprised if anyone actually loses one of his or her guns but considering the small arsenal on display, I decided it best to keep my liberal mouth shut.

I spent most of the time taking pictures. But my niece, my dad, and my brother were so excited about me firing a gun, that I succumbed to peer pressure. The first part of the day involved handguns. For this, the targets were posters of “perps” (perpetrators). I borrowed my brother’s new handgun and took a few shots at the bad guys. I don’t remember all of the gun details, but I’m pretty sure it was a Beretta, only because that’s the gun James Bond regularly used and I’m bit of a Bond fan. If the “perps” had been real, two out of three would have killed me.

For the second part of the day, we broke out the serious weaponry. This was a special occasion. After all, President Obama will soon take away my family’s assault rifles. That’s right, I said assault rifle. I can now say that I have fired an AR15 assault rifle. We fired at targets positioned at 100, 200, and 300 yards. I hit targets at both 100 and 200 yards and then stopped while I was ahead. But my niece had no problem hitting the 300-yard target. The targets were thick metal and the 200-yard metal pig made a beautiful tone when hit. I’m sure this won’t go over with the gun crowd but shooting could be more rewarding if it were more musical.

I’m not going to run out and buy a gun. But I have to admit, the outing was more fun than I expected. And it brought me closer to my family. So I’ll finish this post with a few photographs from Uncle Bob’s firing range in the badlands of Wyoming. 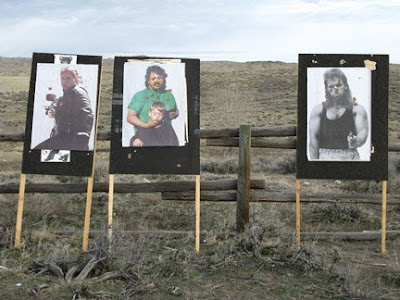 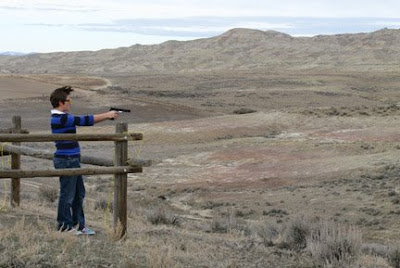 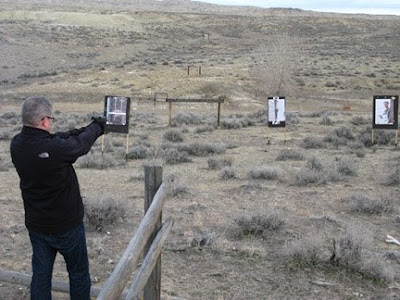 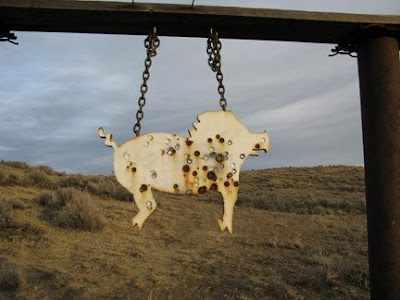