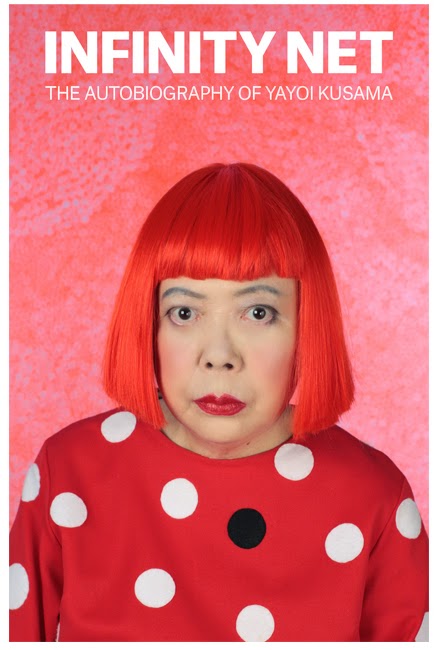 I like the work of Yayoi Kusama.  Its weird, meticulous patterns and shapes create mesmerizing images that are not only iconic, they are also strangely emotional.  I've written or referenced Kusama's work numerous times here on the Art Lobster. Check out posts here, here, and here.  And she just recently came up in a post about the work of Motoi Yamamoto.  You can read that post here.

So in my quest to read books about art and artists, it's no surprise that I chose to read Kusama's autobiography, Infinity Net. (The book was translated by Ralph McCarthy.)  This book only makes me like Kusama more. Why? Because the book is proof that (and I'm now about to embrace a stereotype) the crazy artist is a real phenomenon.  And while I'd love to be a great artist, I don't think I'm crazy enough. OK, maybe Yayoi is too crazy. After all, she moved her studio to a location near a mental health facility so she could live there and still be close to her work. But that instability benefits us all.

My not-so-secret desire to be a world-famous artist obviously isn't strong enough to drive my actions.  Because when I read books like this, I realize that many artists have deep, obsessive needs to get their creative ideas out of their minds and into the real world.  Kusama is nothing if not relentless when it comes to the obsessiveness of her artistic ideas.  And I don't think I have that in my creative thought process.

After dealing with a strict mother and a supportive yet distant father while growing up in Japan, Kusama decides she will do what ever it takes to make her way to the United States of America.  She even goes so far as to write Georgia O'Keeffe a letter asking her advice.  And believe it or not, she got a response from O'Keeffe that helped Kusama land her first show in the US.

Infinity Net is a great way to experience the history of art from the 60s to the present. Because as Kusama navigates her way from Washington State (where she had her first US gallery show) to New York, she meets a who's who of artists from the 60s and beyond. One of the most interesting episodes of her life includes a lengthy period when she was involved with the reclusive and much older artist Joseph Cornell.

This book gives lots of insight into Yayoi Kusama's creative process.  It also offers an idea of the things that have inspired her to create the visual elements that are so iconic in her work.  The infinity net paintings and her endlessly repeated dots seem to be a way for her to deal with noisy voices and strange visions that inhabit her head. Here phallus-covered objects stem from her strange relationship with men, a relationship that left her terrified of sex.  That nervousness about sex also seemed to inspire her "happenings," many of which found groups of people naked and engaged in orgies. Kusama seldom participated in the nudity and sex.  The pumpkins in Kusama's works are remnants from an unhappy time from her youth spent at a school in Kyoto.  While there, she repeatedly painted pumpkins although in a more realistic style.

One last note about Yayoi Kusama's progressive nature.  The artist was well ahead of her time when it came to celebrating gay men and women's rights.  Kusama regularly asked gay men to participate in her happenings where they were invited to openly demonstrate "romantic love."  She even went so far as to establish a social club called KOK whose members were all gay men.  This well before drawing positive attention to gay life was much less accepted than it is today. And her independent voice helped her break into the largely male art world of the 60s and 70s.

Infinity Net is well written although sometimes a little strangely worded.  I think that may be more a function of translation than of the story telling.  Kusama's stories are engaging although sometimes they are a little on the intellectual side.  The writing can at times present an ego that only a successful artist can deliver, which actually gave the book snarky, fun voice.  This book has a wider appeal than it might first appear.  Sure, it occasionally drops into the weeds and there were plenty of references to words, ideas, and people that were above my intelligence.  (I'm glad I read this on my Kindle with its on-board dictionary.) But it was an intriguing read about a very rare breed of celebrated artist: a woman.