One of the reasons I return to New York City year after year is the city’s willingness to embrace artists’ crazy ideas for monumental projects.  One of the best examples of this was Christo and Jean Claude’s epic The Gates installed in Central Park.  On this recent trip I experienced two such efforts including Kara Walker's installation for Creative Time, an organization that commissions and presents ambitious art projects throughout New York City.

For Creative Time's most recent project, they looked to a Brooklyn landmark for a space to present art: what’s left of the Domino Sugar Factory.  Parts of the factory have already been torn down and the rest will soon be demolished to make way for gleaming new river-front condominiums.

The Domino Sugar Factory was built in 1856 by the Havemeyer family.  By 1870 it was refining more than half of the sugar in the United States. That history was an important factor when visiting the installation of Kara Walker’s A Subtlety, or the Marvelous Sugar Baby.

A bit of information that will help inform the installation. The title of the work comes from a sugar tradition. In a past time when sugar was a luxury, subleties were elaborate sugar sculptures made for the rich as extravagant, edible table decorations. They fell out of favor as slavery helped sugar become more widely available to the general public.

Visiting the Domino Sugar Factory was an interesting experience.  The lines were surprisingly long and I’ve heard from friends that they’ve been that way most of the installation’s run. Fortunately the lines moved quickly and it was only about twenty minutes before we entered. To enter the building, you had to sign a release form acknowledging that you were entering an active demolition site.

As you entered the building you saw an elegant, graffiti-like sign that offered the full, poetic title of the work, A Subtlety or the Marvelous Sugar Baby, an homage to the unpaid and overworked artisans who have refined our sweet tastes from the cane fields to the kitchens of the New World on the occasion of the demolition of the Domino Sugar Refining Plant. 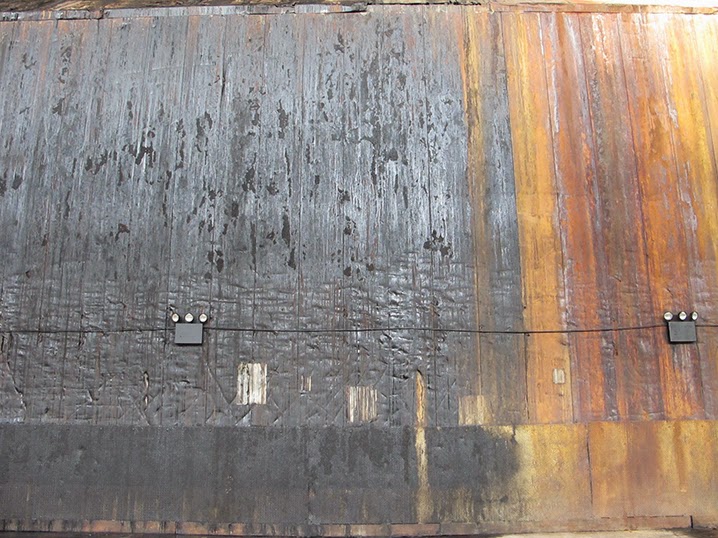 The surprise of walking into the cavernous building was the smell.  Even though the refinery closed in 2004 it still emotes a strong sugar smell.  Many of the walls are streaked and rusted with molasses and molasses still drips from the ceiling. In fact, my shoes were sticky after leaving the installation.

Kara Walker's best known works feature intricately-cut, black paper silhouettes of slaves and their owners, frequently in humorous, disturbing, or graphically-sexualized situations. Her work often complicates and questions issues of power and repression and the effect on humanity.


A Subtlety takes Walker’s recognized style and themes to monumental heights.  The star of the show is a giant sphinx-like statue with the head fashioned as a stereotypical mammy and the body as a hyper-sexualized black woman. The entire structure is coated with a thick layer of white sugar. In true Walker form, it is both alluring and discomforting.  The curatorial statement for the piece notes that the discomfort is intentional saying, “She has the head of a kerchief-wearing black female, referencing the mythic caretaker of the domestic needs of white families, especially the raising and care of their children, but her body is a veritable caricature of the overly sexualized black woman.”

It’s interesting then, that in our age of the selfie, Kara Walker’s A Subtlety is proving to be controversial. Visitors have taken to snapping obscene pictures with the giant, naked sphinx, something that almost seems to prove Kara Walker’s point of society’s overtly-sexualized response to black women.

While the Sphinx is an emotional and provocative image, my favorite part of the show were the cadre of young black boys cast in resin and dripping with molasses and sugar. The slightly bigger-than-life-sized figures were created by enlarging figurines Walker found on Amazon.com, interesting as the figures are fairly racist. It's hard to imagine that these are available on Amazon. And yet, as is frequently the case with Walker’s work, they are both “racist objectifications and strangely cute and compelling.” Several of the figures had crumbled under their own weight creating eerie images of child labor gone wrong. The appealing faces delivered big emotional impact.

All told, Kara Walker delivered a big Art-world punch.  I left this installation wanting to be a better "old, rich, white guy." OK, maybe I'm not that rich.  But I do feel like I've lived a life of privilege and part of the reason I've had that privilege is because I'm white and male.  That's why I hope Kara Walker keeps challenging me and the rest of society on issues of race and gender.  I'll finish this post with a few more photographs from the installation.

Instagrams from this visit: