And now, the return of the Flirtcam.

For years, I seldom went out without my Polaroid i-Zone camera. The i-Zone, with its postage-size instant photos, was the perfect icebreaker. Snap a quick picture of strangers and give it to them, and you’re suddenly friends. It was the ultimate Flirtcam. Even today, some of my best friends are people I met by giving them a Polaroid while out on the town. Unfortunately, i-Zone film was one of the earliest casualties as Polaroid killed off its entire line of instant film.
But Polaroid is back with its new Pogo printing technology and this spring they launched a digital camera with a Pogo printer build in. It may signal the return of the Flirtcam. It’s not as immediate as the i-Zone. And the quality is even worse. But, as I discovered on my recent trip to Vegas, the reaction a Pogo photo elicits from strangers is very similar that of an i-Zone.
On our way to the strip for a night on the town we ran into BMX racer John (in town for a BMX awards show) and his friends Courtney and Mathieu. After a couple of instantly-printed Pogo photos, we were suddenly friends. We spent hours wandering the strip, hitting the casinos, and enjoying Vegas nightlife. I don’t think I got back to my room until well after 4:00 a.m. Oh the power of the Flirtcam.
One difference with the Pogo is that it’s a digital camera. So I can keep a copy of the picture even after I’ve given away a print. Here then, are a few photos of John, Courtney, and Mathieu as well as some of the Flirtcam friends we made at the Pet Shop Boys concert.
Me and Felix with John (left) and Mathieu (right). 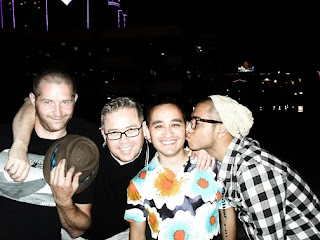 From left to right it's Mathieu, John, and Courtney. 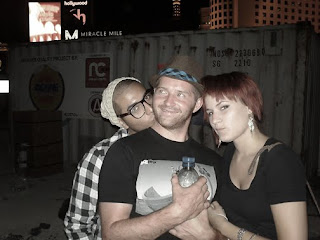 And a few of our Pet Shop Boys Flirtcam friends. 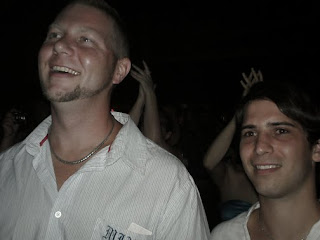 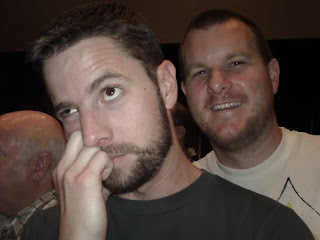 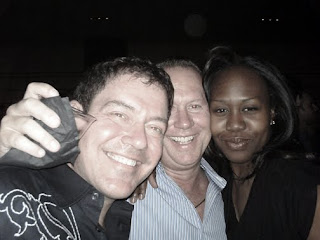 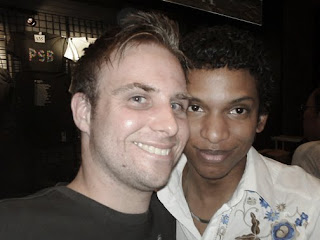