So I'm in San Francisco to see a new musical based on Armistead Maupin's Tales of the City with music and lyrics by Jake Shears and John Garden of Scissor Sisters fame.  (Wow, there are a whole lot of weird references in that sentence that likely make no sense to the vast majority of Americans.)  And I figure the best way to kick off this adventure is to take a self-guided walking tour.  I have to give a big shout out to Tours of the Tales, a web site that offers downloadable, impeccably-researched PDF walking tours based on the Tales of the City novels. It would have been impossible to find these locations and to remember how they factored into the stories without these guides.

I started at The Buena Vista, a bar at the corner of Hyde and Beach.  It's here that Mary Ann Singleton drank three Irish coffees and then called her mom in Cleveland to tell her Mary Ann would not be returning from her San Francisco vacation. Of course Felix and I had to have an Irish coffee.  But I stopped after one for fear I might end up staying in San Francisco. 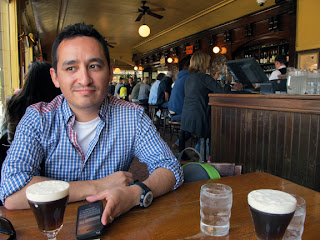 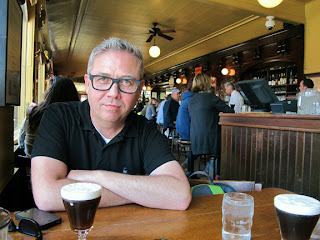 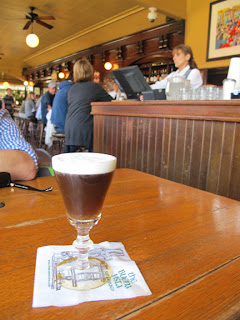 We left the bar and followed the same path Mary Ann did, walking across the street to Aquatic park.  It's here that Mary Ann looks toward Alcatraz and vows not to think about her mother for a while.  In the mini series, Laura Linney is seen on the concrete stairs in front of the Ghirardelli sign. 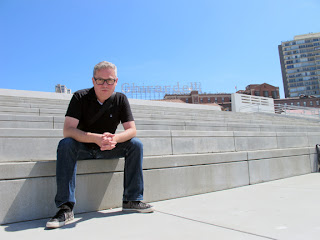 We moved on to the corner of Hyde and Union, a neighborhood that features frequently in the entire Tales series.  I, like Brian Hawkins, have now purchased a Milky Way at the Searchlight Market.  And like Michael "Mouse" Tolliver I've purchased Oreos in the same iconic store. 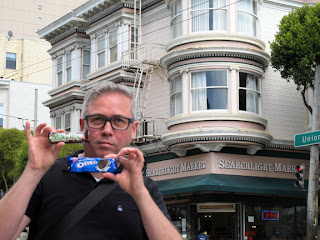 And, I've now had ice cream at Swensen's, the place where creepy Martin Williams bought Mary Ann ice cream in the first book.  In the most recent book in the series, Mary Ann in Autumn, Mary Ann returns to her old neighborhood after 20 years and gets a Swiss Orange Chip cone.  I chose the same flavor. 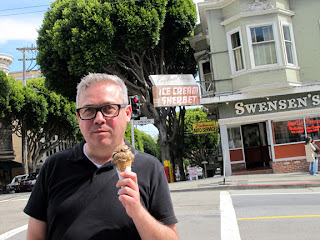 There are two tiny streets in San Francisco's Russian Hill district that were Maupin's inspiration for the books' central location, 28 Barbary Lane.  The first is a magical street that is really more of a garden path.  I had to take pictures on the rickety wooden stairs that lead to Macondray Lane, where many scenes from the Tales mini series were shot. 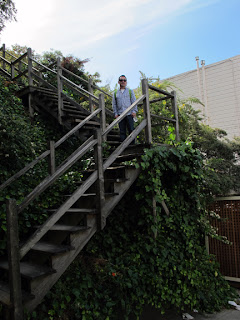 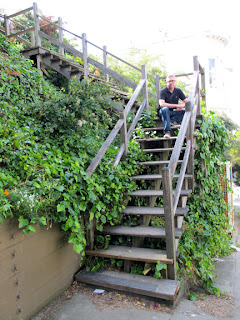 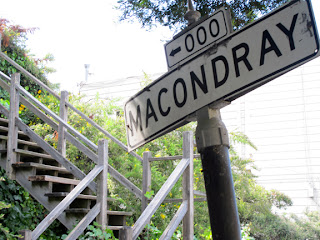 The second street (Havens) is also accessed through a tiny, stair-filled path.  Just about every house on Havens could serve as the inspiration for 28 Barbary Lane.  The writers of Tours of the Tales suggest that the inspiration might be 39 Havens, and it certainly looks like a place where Anna Madrigal might grow pot. 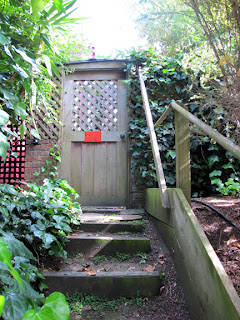 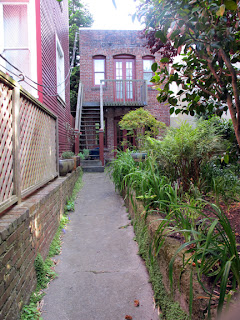 A few more photos from Havens.  I almost expected to run into Mouse. 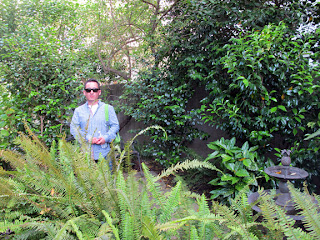 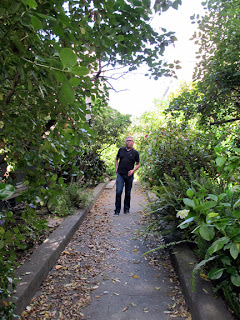 Sure this is a geeky post.  But this walking tour was really fun.  And it took me to some magical places in San Francisco; places I would never have otherwise gone to, let alone found.
Posted by Jeff at 9:10 AM