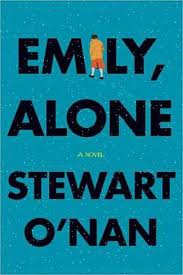 I liked Emily Alone by Stewart O'Nan.  But it may be hard for me to articulate why.  It's the story of a woman near the end of her life.  Her husband Henry has been dead for several years and the children have long since moved away.  She spends her days with her trusty, if somewhat misbehaved dog Rufus and her best friend Arlene doing the things that women of certain age do.  There's not much more to the book than that.  Which seems like it might be boring, its uneventful-ness making the story dull, even quotidian.

So why did the book appeal to me so much?  Maybe it's because I've been in a melancholy mood lately and Emily Alone reads with just enough gloominess that it's like commiserating with an old friend.  Maybe it's because I related with so many of the characters on so many levels.  I related to Emily not only because she reminds me of my parents and the issues they face as they grow old, but also because as I grow older, I'm often left wondering how I'll cope with old age.  I related to Emily's kids who probably don't visit their mother enough (guilty) or call enough (guilty) or even know how to juggle the ideological and political differences that have grown between them (guilty again).  And I related to Arlene and Emily's friendship; but then again, I've regularly admitted that there's a little bit of "old lady" in me which means I can imagine spending an afternoon with the two ladies, wandering Red Butte Garden or visiting the Utah Museum of Fine Arts.

I also liked the book because in infiltrated my life.  Since reading the book, I've had more than one "Emily" moment.  There was getting my beloved car back from the body shop and lamenting that it will somehow never be the same.  There was waking up one morning to a "road closed" sign at the end of my street and fretting about all the trouble the situation would cause me. And there was the frustration associated with visiting a museum gallery overrun by noisy third graders.

Yes, this book reads more like a collection of short stories than a plot-driven novel.  It's more a meditation on life at the end of life than a traditional exercise in story telling.  But with its wonderfully developed central character and  it's pensive prose, Emily Alone is a book that's hard to not like.