Recently, I visited the LDS' Church History Museum to see the works by LeConte Stewart.  While I was there, I ran into another exhibit, Pieces of Me: Quilted Expressions of Human Ties.  The exhibit is presented in a way that can only be described as garish.  And it's next to the museum's permanent exhibit, A Book of Mormon Celebration for Children, which means the galleries were filled with a lot screaming and banging.  I'm still not sure how the kids were celebrating the Book of Mormon, but it involved a lot of yelling and a whole lot of banging blocks or hammers or something.

But even with all of that, there are some interesting quiltss to see at this exhibit.  Let's start with the 19th Century, dizzying handiwork of Thomas and Betsy Bullock.  Robbing Peter to Pay Paul delivers an intoxicating pattern with astonishing quilting. 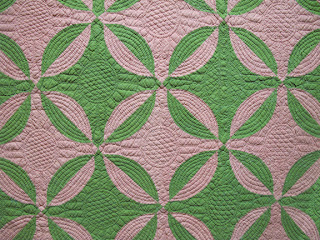 And if you think that people might have to be mentally unstable to undertake projects like this you might be right. Seymour B. Young, who was the director of the Utah asylum for the insane, believed that minds must be kept busy to aid the health and well being of the patients. So he taught patients craftsmanship skills like quilt making.  The result?  The psychedelic imagery of Asylum Quilt (circa 1877) created by the patients. 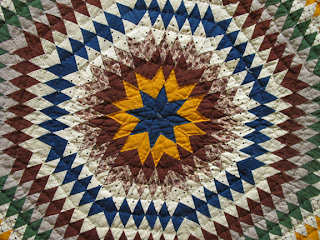 There are also some delightfully strange quilts celebrating Mormon milestones.  To All Worthy Male Members created in 1990 by Emma Allebes celebrates the 1978 announcement allowing blacks to hold the priesthood. 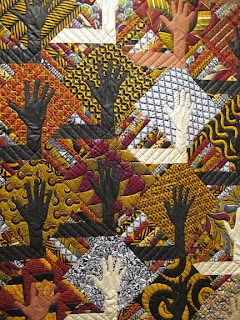 My favorite quilt in the show is Do Not Remove by Penalty of Law created in 2008 by Miriam and Michael Zabriskie. This large quilt is decorated with hundreds of tags taken from clothing, most of them old and many of them with ties to Salt Lake City.  I spent a good ten minutes lost in the intrigue. 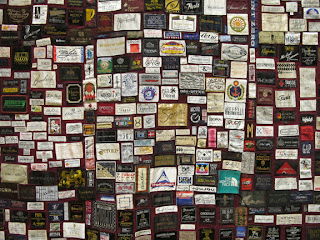 I love this label from The Paris, Salt Lake City.  I'm thinking of requiring all of my friends to now refer to me as "The Paris." 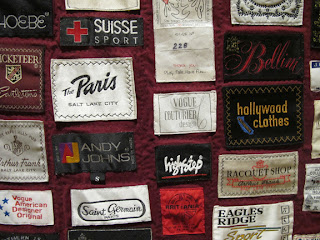 And how about this, Bill Blass created clothes specifically for ZCMI.  I've never missed ZCMI more.  Oh, and look.  It's Botany 500 creating clothes for The Paris, Salt Lake City.  That's right, The Paris gets clothes from all the top brands of the day. 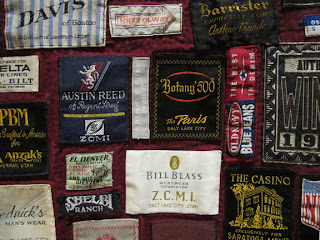