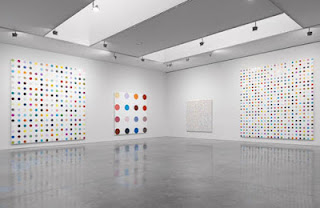 If you pay any attention to the Art world, you've likely heard about the brouhaha that arose from Damien Hirst's most recent Art-world stunt. That stunt involved taking over every Gagosian gallery around the world which includes four New York City locations, two London locations, and galleries in Paris, Rome, Athens, Geneva, Hong Kong, and La Jolla. The show is called Damien Hirst: The Complete Spot Paintings 1986 - 2011.

By pure Art-fan luck, I was able to see one of the shows at the Gagosian gallery on West 21st street in New York City. This is one of those moments when I have to question Art. I'm pretty sure that Larry Gagosian and Damien Hirst have just foisted one of the greatest scams ever foisted on the world of fine Art. Before you write off my criticism, you should know that I'm a big fan of much of Hirst's work.  With other artists like Jeff Koons, Marc Quinn, and Tom Friedman, I think Hirst is an important voice in a new wave of artistic ideas.

But the spot paintings?!? Really!?! These are canvases (as well as a bunch of editioned prints) that are almost exclusively painted by anyone other than Hirst. He has an army of assistants that have been painting spots for months in preparation for this P. T. Barnum-like event. In fact, it's unsure how much involvement Hirst has even had in the direction of how the paintings should be made. Don't get me wrong; I love the graphic design of these paintings.  Walking into the Gagosian Chelsea gallery and confronting these massive canvases is a wildly pleasing experience.  The paintings play tricks on your eyes. From the tiny spot paintings to the overwhelming canvases that overtake your vision, these paintings delight, particularly for someone like me who loves repetition with surprising variations. But these paintings are more graphic design than they are fine Art.

I imagine that Damien Hirst's spot paintings will accomplish what many Pop artists before him were able to accomplish; they'll offer a slew of simple-to-create works that just about every museum and gallery on the planet will acquire. That's right, I'll be surprised if a few museums here in Utah aren't able to pick up a painting or a print from the spectacle. They won't come cheap, either. Larry and Damien will make a pretty penny off of this scam. And once every museum on the planet has a spot painting, Damien Hirst will have ensured his place in art history, because no museum will be willing to criticize his work (even his "spotty" work) if they have a spot painting in their permanent collection. It's a shrewd (if not cowardly) way to make the history books.  You've seen this same trick performed by many Pop artists, most notably Andy Warhol. 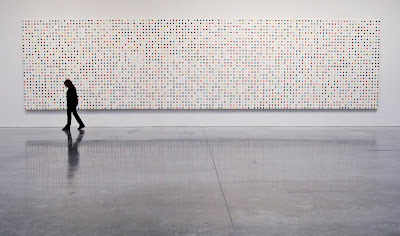 But wait, what if I'm wrong.

Now that you know how I feel about all these spots, I should admit that I can also defend the work. Here's the problem, any time an artist does something repeatedly for an extensive period of time, it's worth taking a closer look.  Damien Hirst has been making his spot paintings for twenty-five years. It's obvious he's trying to make a point (or would that be a spot).

Rumor has it that some of the early spot paintings weren't just created by armies of assistants but also by colleagues and friends. If that was happening in 1986, just as the internet was romancing the public, Hirst may very well have been ahead of the curve on a cultural meme that has led us to the interconnected society we live in today; where thousands of people from around the world can come together and accomplish wondrous things. Maybe all those spots say something about who we were at the end of the 20th Century.

I also wonder if the spot paintings may relate to the general themes of Hirst's art. Death is often sited as the central idea of Hirst's work. But I like to think of his art as being more about soul, or maybe the lack there of. In a time when many are asking questions about the soul of the Art world; a time when it's easy to think that Art is no longer about real ideas but just about art dealers, and collectors, and museums, and the millions of dollars that are more about greed than about Art. Maybe at a time like this, artists should be asking questions about the soul of Art. And if you remove the soul from Art, you might very well end up with a bunch of spots. So I can argue that this is just a giant prank. But maybe this is Damien Hirst asking us to ponder the state of the Art world.

Whatever your feelings are about The Complete Spot Paintings 1986 - 2011, you have to admit Damien Hirst knows how to stir the Art-world pot. And I suppose, that's what artists are supposed to do.
Posted by Jeff at 9:07 PM