Art gets dirty. And dusty. And maybe cremated.

I like the curators at New York's Museum of Arts and Design (MAD). They have a penchant for organizing exhibits which look for art in unlikely materials.  In 2009 there was Slash: Paper Under the Knife with it's astounding paper works. 2010 brought Dead or Alive, an exhibit that featured art created from the products of living organisms. And currently on exhibit is Swept Away: Dust, Ashes, and Dirt in Contemporary Art and Design. Once again the curators at MAD have created an intriguing show fabricated from the unexpected.

It's easiest to show some of the work. Here's Catherine Bertola's mystical installation titled Unfurling Splendor (Adaptation IV), 2012. It's made of PVA glue and dust applied to the walls of the museum.  The result is a strange, almost  tragic view of our collective histories. 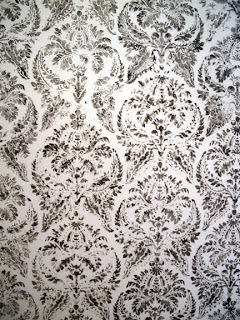 And how about Chinese artist Zhang Huan's Ash Army No. 1, 2008 (Ash, Steel, Wood). Zhang uses incense ash to create these sculptures. That may not have the impact here in the U.S. that it does in countries where temples are filled with incense (and the resulting ash) lit by people praying for a variety of  personal desires. 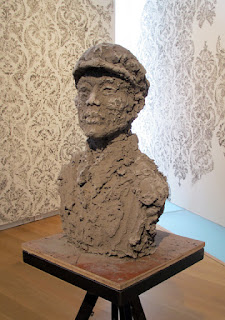 I loved Phoebe Cummings The Delusion of Grandeur, 2011 (Raw Earth and Wood). Cummings uses basic clay from the earth to create immensely detailed sculptures that are extremely fragile and will ultimately crumble, only to be remembered through photographs. This work is hauntingly beautiful and painstakingly displayed by the curators at MAD. 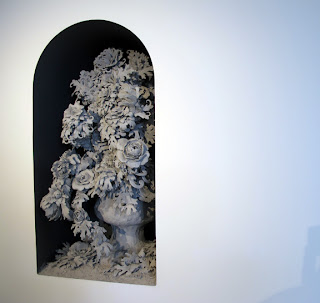 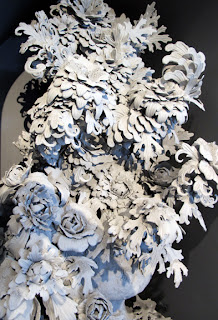 Also on view are several works by Jim Dingilian who takes old liquor bottles and paints the insides with a number of materials including smoke. His scenes are mostly contemporary, giving these works a strange, modern take on something that feels old and from a place far, far away. 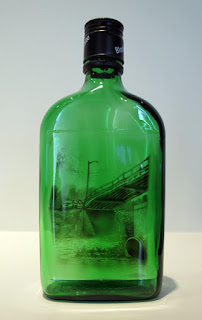 As a big fan of Vic Muniz, I can't not talk about his large scale photos of even larger scale earth works. and his massive earthworks, and it's not just because he references Robert Smithson. They're works that remind us how much damage we humans do to the earth. But at least these works offer damage with a sense of whimsy. 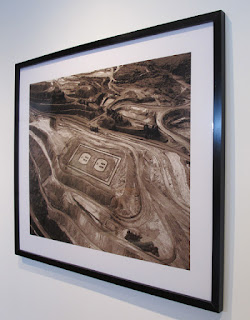 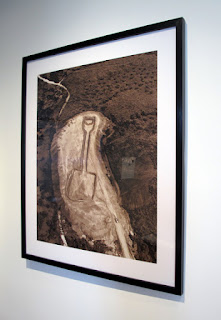 There are plenty of other works to see at this well-thought show. You can see it now through August 12, 2012.