Book six: Paris, I Love You but You're Bringing Me Down by Rosecrans Baldwin. 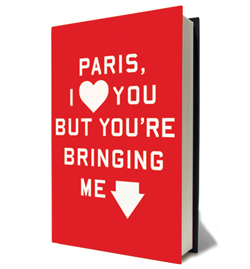 Most major life changes are both magical and difficult.  That's the premise behind Rosencrans Baldwin's charming book Paris, I Love You but You're Bringing Me Down. After landing a job at a Paris advertising agency Baldwin and his wife pack up and move from New York to Paris. This book is the story of their adventures.

I found the title of this book a little misleading.  It's obvious Baldwin loves Paris.  The "bringing me down" part didn't really come through.  The book feels more like a quirky love letter to all things Parisian. Sure, Baldwin writes humorously about the difficulties of living in a country where you don't speak the language well enough to be completely effective. Or about the strange habits and lifestyles of the French.  Or even the weirdness of European advertising.  But all of those stories do more to reveal Baldwin's heartfelt affection for  Paris and its residents that make it feel like Paris is a downer.

The misleading title doesn't mean the book isn't enjoyable.  With its strange mix of eccentric characters and unlikely scenarios Paris, I Love You but You're Bringing Me Down is a short, delightful read; particularly if like me, you work in advertising.

Email ThisBlogThis!Share to TwitterShare to FacebookShare to Pinterest
Labels: Books, Paris I Love You but You're Bringing Me Down, Rosecrans Baldwin