As promised, this is my second post about my trip to Paris's Grand Palais to see Dynamo: A Century of Light and Motion 1913 - 2013. You can read the first "Vine video" post here.  In this post, I'm featuring  static pictures instead of videos. I'll try and write less and show more pictures. Once again, I've grouped works into categories.

The black and white of op art.
Many of the works in this show were limited to just two colors: black and while. Limiting color doesn't mean you can't achieve impact.  From one of the earliest pieces in the show by Henryk Berlewi to later works that more forcefully embraced op art as a way to play with perception, black and white can be a powerful color scheme.

The power of color.
Dynamo showcased color in several amazing ways.  One of my favorite works was Chromosaturation by Carlos Cruz-Diez. The walls of these maze-like rooms were so precisely lit, that the rooms themselves became big blocks of color, more emotionally powerful than you might expect.  It also did strange things to perception of color.

When lines collide.
I can't believe what you can accomplish with just a simple line.  These works are stunning for their simplicity.  But also for their ability to really screw with your vision. 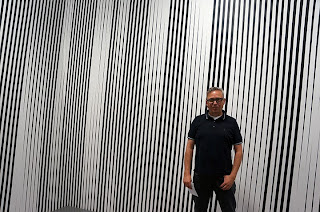 The art of reflection
In my previous post about Dynamo, I mentioned that seeing one's self in art is powerful.  These works prove that to be true. While I may appear to be up-side-down in some of these photos, It's actually because the art works and their strange lens-like qualities distort reality; or do they simply reveal reality.

Le Prisme by Nicolas Schoffer was a dizzying window that opened onto an endless kaleidoscope, making the viewer feel like the walls of the Grand Palais were hollow and filled with magical light.

I'll take a work by Anish Kapoor any day.  His intense use of color and reflection captivate the viewer and force moments of self reflection. The fact that they frequently create instant, constantly changing abstract works of art  just makes them all the more intriguing. 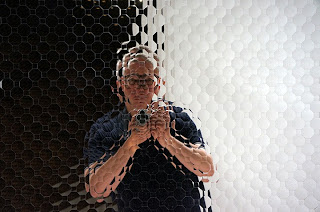 Yayoi Kusama is famous for her spots, usually rendered in bright colors and painted on everythig from pumpkins to spindly tenticles.  Here they covered the walls of a precisely constructed museum-gallery maze. Reflective domes covered with more reflective domes created a world where every museum visitor was repeated endlessly.  It was like a strange art-world quantum physics universe. 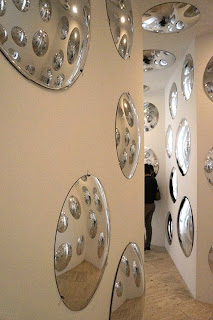 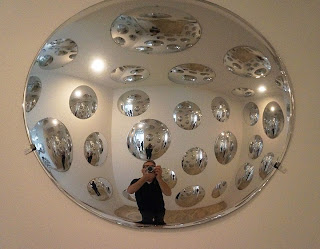 Basking in the glow
Some of the masters of light were on view in Paris. Dan Flavin's minimalist and structured fluorescent tubes were brilliant for their ability to transform a gallery and everyone in it. Neon also made a big showing. 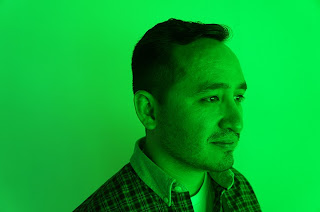 Perception is certainly not reality.
I'll close with one of my favorite works in the show. Felice Varini's Vingt-trois disques evides plus douze moities et quatre quarts (2013, orange acrylic paint on adhesive foil) was mind-blowing.  I first experienced it entering the main hall of the Grand Palais. We were there for a completely different event.  I didn't know it was part of the Dynamo exhibition and assumed it was an abstract, rather perplexing series of random splashes of paint splattered across the front of the building; probably done by some street artist who's made it big in the fine art world.  It made little sense to me but hey, we're talking contemporary art here, so I processed it and moved on.

It wasn't until the following day, after having purchased my ticket to Dynamo that I was wandering through the galleries and the reality of these orange splashes locked into view.  As you stepped through a door onto a patio, all those random shapes created a perfect pattern. I love that the view almost didn't seem real.  It's almost as if someone used Adobe Illustrator to add the pattern afterwards.  And it didn't feel like that just in the flat photo you see here.  The effect was even more disorienting when you were standing in front of the image. It was pure art-world magic.  But maybe like many things in the contemporary world, it was enabled by technology, which would be appropriate considering the technological feeling than many of the works in Dynamo embraced.