The bigger-than-life art of Keith Haring.

There was a lot of Keith Haring involved in my trip to Paris.  I've already posted about my visit to the Musee d'Arte Moderne for Keith Haring: The Political Line.  That exhibit wasn't confined to one location.  Some of the works included in the show are so big, they wouldn't fit in a traditional museum.  So we made the trip to the exhibit's second location in the 19th Arrondissement, a place where I doubt many tourists are likely to visit.  It's a working-class neighborhood where you'll find a venue called Le Centquatre. And there, was an exhibit of Keith Haring's work that was unbelievable for its scale. But before I get to the scale, a comment about smaller details; I loved the graffiti-like, spray painted signs (see inset photo) that could be found on walls everywhere directing visitors to the exhibit spaces.  Now, onto the exhibit.

The first thing you encounter upon entering the exhibit was a big surprise: Pop Shop Tokyo (Container), 1988, mixed techniques on wood and steel containers.  Keith Haring's two New York Pop Shop locations are legendary with the SoHo location open until 2005.  But less knows is his shop in Tokyo.  It was created using shipping containers.  And the actual container was on view at this show.  Wow! I just wish it was filled with all the cool paraphernalia that would have inhabited the shop in 1988. 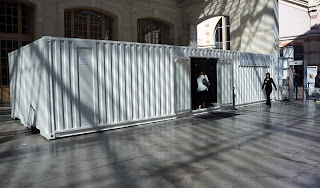 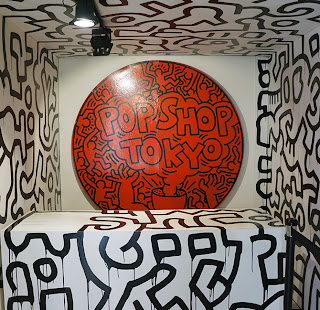 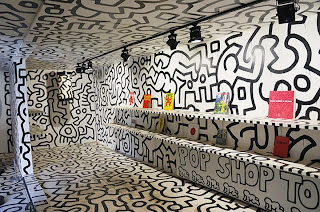 In the large center area of Le Centquatre there was more than the Pop Shop Tokyo, there was also a collection of giant sculptures.  I've seen big Keith Haring sculptures but these were bigger than anything I've seen before.  They were brilliant. I particularly loved the massive dancing dog.  But the great thing about all of these sculptures is the joyful, playfulness of the works.  You can't help but have a great time surrounded by works like this. 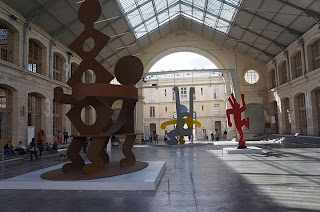 A massive sculpture in bright, primary colors was in the entryway to Le Centquatre and the creatures that make up the sculpture are positioned as if they're street dancing which was all too appropriate.  Because like the party after the exhibit at Musee d'arte Moderne, there were street dancers practicing here, giving a sense of 80s fun to the entire affair.  And making the sculpture even more vibrant. 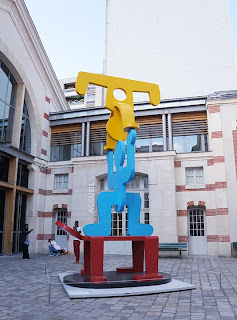 The large areas of the Centquatre allowed for the exhibition of some extremely large works like the brilliant The Marriage of Heaven and Hell, 1984, acrylic on canvas.  I've seen photos of this work displayed in the past and almost always, it's been shown with part of the painting rolling onto the floor. But here there is enough room to show it hanging fully on the wall. Created as a curtain for a ballet of the same name, this work seems strangely relevant during a time when the debate about same-sex marriage rages.

But the real reason I made the trek to Le Centrquatre was to see Keith Haring's The Ten Commandments, 1985, oil and acrylic on canvas. These works, painted on 25-foot canvases are spectacular. I loved them for their graphic simplicity, their color, and their willingness to confront current issues. From greed, to cruelty, to hypocrisy, these paintings slap you in the face with their emotional strength. And the presentation at Le Centrquatre could not have been more powerful. Lit brilliantly in a dark space, the works gave a sense of religious reverence that silenced most visitors and left the rest of us whispering softly.  It was a decided change from the happy playfulness in the sculpture courtyard.  Once again, I was left standing in awe of Keith Haring's inspired emotion created with just the simple use of lines and color. 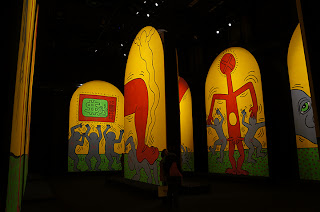 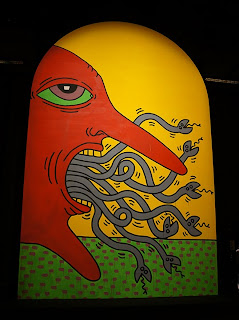 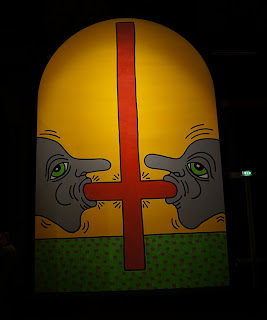 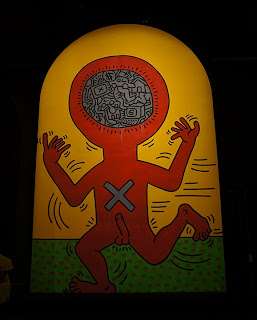