A grey day at Tate Modern.

I usually go to museums because there's a temporary exhibit that I really want to see.  The exception: when I'm visiting a new city and there's a museum that I really want to visit. OK, so I didn't make it to the Louvre in Paris which is a bit embarrassing.  But I've always wanted to visit London's Tate Modern.  Unlike last summer which featured a blockbuster Damien Hirst exhibit, this year there wasn't much interesting going on at Tate Modern, at least not from a "special exhibitions" standpoint.  ( I have a feeling Tate Modern would disagree with this assessment.) The lack of blockbuster exhibits might be because the Modern is getting a massive addition and much of the museum is shut down, including the main hall.  That was a bummer.

Why not take a different approach to viewing a permanent collection? For my visit to the Tate Modern, I've created my own curatorial theme.  That theme was inspired by a painting I stumbled onto early in the visit: Gerhard Richter's Grey (1974, Oil paint on canvas). 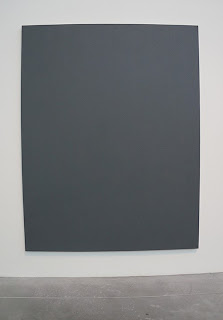 The painting was created in the 1970s when Richer produced several groups of grey paintings.  He was apparently attracted to the neutrality and inconspicuousness of the color. This is one of those paintings that can inspire plenty of eye rolling and questions about what really constitutes Art. But I like grey and this painting struck me as a calming force in a chaotic world.  And there's this statement from the artist, "Grey is the epitome of non-statement, it does not trigger off feelings or associations, it is neither visible or invisible. Like no other color, it is suitable for illustrating 'nothing.'" That's an interesting statement from an artist who resisted ideologies of any kind.  And it's an interesting idea to inspire a way of looking at art.

With that in mind, I spent the rest of my visit at Tate Modern paying particular attention to the color grey. And I was surprised, how many feelings and associations grey can trigger.  Even from Richter who is responsible for another grey work of art at the museum.

Two Sculptures for a Room by Palermo (1971), depicts Richter and fellow German artist Blinky Palermo posed in a never ending stare-off. It's a silent debate that stays brilliantly true to the idea of "non-statement." And yet, there has to be some sort of conversation going on. 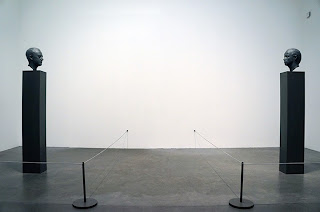 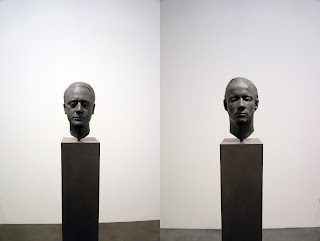 One of my favorite works in the museum was Alfredo Jarr's installation titled Lament of the Images (2002, Glass, perspex, metal, electrical components). This work consisted of two light tables one suspended from the ceiling which slowly lowered until it rested on the other, blocking out all of the light except for a thin sliver that made a fine line on the walls of the gallery.  The strange light seemed to wash out everything in the entire room, resulting in a neutral, monochromatic wash of contemplative grey. 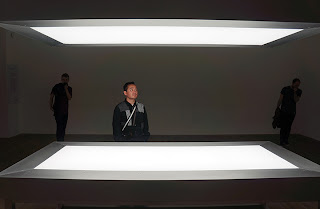 Piles of seemingly unidentifiable gray matter could be found frequently at the museum.  Lynda Benglis's oozing, dripping pile of lead sitting in the corner of a gallery was a little creepy and seemed to question naturalness. Gilberto Zorio's work seemed to feature a similar, mini pile suspended elegantly from the ceiling.

I forgot to capture the name of the artist and title of the work.  But its Japanese-like attitude brought a rustic grey calm to the gallery. 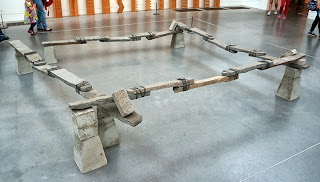 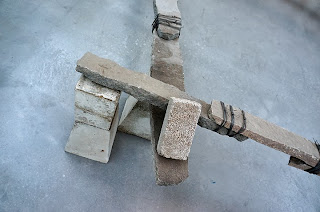 I'll end this grey commentary about a work created by the artist who started this whole post.  An entire gallery at Tate Modern is dedicated to Gerhard Richter's group of oil paintings inspired by the American avant-garde composer John Cage. The paintings were made while the artist listened to the music of Cage.  I like these paintings, partially because it looks as if the Richter is giving us a hint at what might be hidden under the grey canvas that started this whole post. 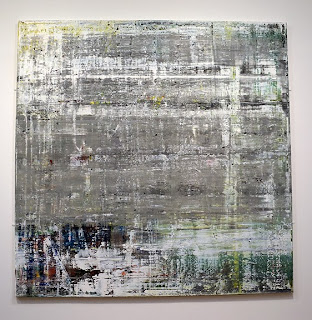 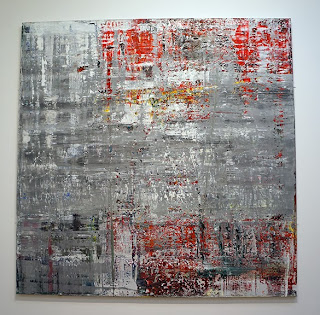 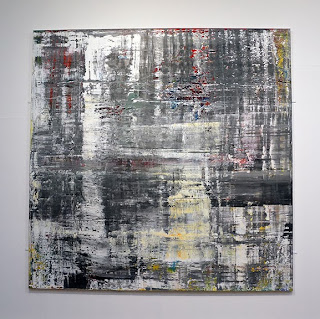 I suppose you can make the argument that focusing a museum visit around "grey" is stupid. You might be right. So in rebuttal, here's Dan Flavin's Untitled (1987).  Enjoy the bright and shining colors.