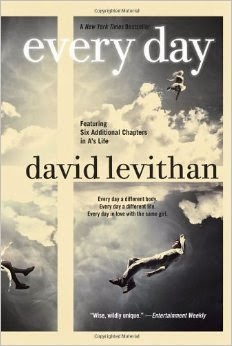 I’m a fan of David Levithan. His Y.A. novels Boy Meets Boy and Will Grayson Will Grayson are two of the most charming books I’ve ever read.  So when my book club suggested reading Every Day, I was all for it. (I listened to the audio book which was read by Alex McKenna whose young, androgynous voice was perfect for the gender-hopping narrator. In fact, with an ambiguous name like Alex, I had to go online to confirm that the reader is a woman.)

The central character in the book (Known as “A”) wakes up every day in a different body.  He or she has just twenty four hours to figure out the life and react appropriately.

“A” has learned that it’s best to keep things as low key as possible and to try and go undetected as an outsider. The hope is to do as little damage or create as little confusion as possible for the host person.  This strategy is working quite well until “A” wakes up as Justin.  Justin is somewhat indifferent when it comes to his girlfriend Rhiannon.  But “A” is smitten and feels he has a personal connection.  So as “A” wakes up in different bodies, those individuals go out of their way to catch a glimpse of or talk to Rhiannon.  Eventually “A” tells Rhiannon about the situation and the two embark on a strange relationship.

I liked the book as it began.  But it didn’t take long for it to get tedious.  I’m guessing the constant teenage angst would appeal to a teenage audience.  But I found it grating.  As the book wore on the pace seemed to get slower and slower. And then it came to an abrupt and sudden stop.

I give Mr. Levithan a pass on this simply because Will Grayson Will Grayson is one of the best teen books I’ve read. But I certainly wouldn't give this book the same recommendation.