Gold and the Guggenheim.

Just this past week, I made my first visit to the Guggenheim New York. I went specifically to see the exhibit Paired, Gold: Felix Gonzalez-Torres and Roni Horn.
But before I get to that, let’s talk about museum lines. Because it always amazes me how many people show up to New York museums. I arrived at the Guggenheim ten minutes before it was set to open and already there was a line around the block. 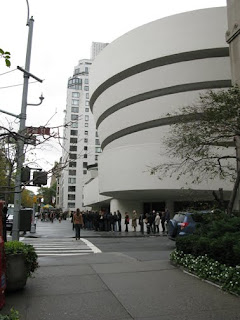 But at least waiting in line gave me a chance to enjoy the museum's architecture. 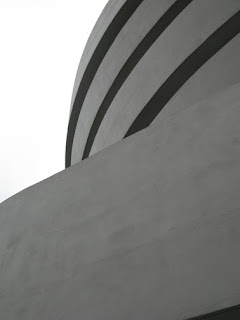 Even as I left the museum an hour later, there was a still a long line of people waiting to get in. 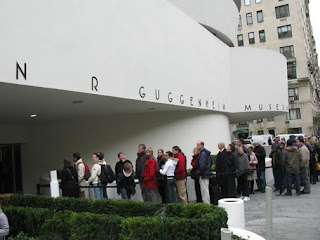 I don’t think the people in line were there to see Paired, Gold based on the reaction I got from the audio tour attendants when I asked if the audio tour included information about the gold show. (It didn’t, by the way.) Everyone was there to see the big Kandinsky exhibit (and it was big). I was on a tight schedule with less than a full day to hit several museum shows. So I skipped the Kandinsky and headed to the farthest reaches of the Guggenheim to see the Felix Gonzalez-Torres works.
I have to say, the publicity for Paired, Gold made it seem like this was a fairly big show. In reality, it was two works, one by Gonzalez-Torres and the other by Roni Horn. These works were shown together because Horn influenced the work of Gonzalez-Torres and vice versa. I’d recently seen the same Gonzalez-Torres work on display at SFMOMA. So I was a little disappointed because I was hoping to see some of the artist’s work that I hadn’t seen before. But it’s still a dang cool work of art and it offered all the magic and intrusiveness that you expect from Gonzalez-Torres.
This was the first time I’d seen any art by Roni Horn. Her work, Gold Field consists of two pounds of gold (and we're talking the real stuff) pressed into a mat. I’d read about the work but had never even seen pictures of it. It wasn’t what I expected. I thought two pounds of gold would feel dense and weighty. But surprisingly, two pounds of gold pressed into a shape roughly the size of a door mat looks fragile and ethereal, almost translucent.
The Guggenheim doesn’t allow photography anywhere in the museum except the lobby (killjoys). But fortunately, they do offer press photos on their Web site. You can use the photos as long give the provided photo credit. So here’s the photo followed by the credit. 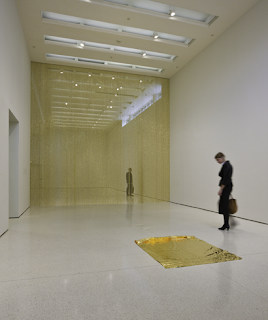