I went to the Museum of Arts and Design (MAD) to see Read My Pins but I was absolutely blown away by Slash: Paper Under the Knife. This is one of the coolest exhibitions I’ve seen in a while. Mainly because it pleases on a variety of levels—whether it’s the sheer craftsmanship, the whimsy and wonder, or the focus on human experience. And it features a cavalcade of today's hottest artists, all of whom regularly use paper in their work. If you’re in NYC between now and April 10, 2010 see this show.
When you head to the galleries, don’t take the stairs. Take the elevator to the fourth floor. Because the effect when the elevator opens onto Andreas Kocks' black-splattered Paperwork #9356 (2009) is spectacular. And if that isn’t enough, you’re also confronted by The Triumph of Good and Evil (2009) by Chris Gilmour. It’s obvious that this sculpture is made from cardboard. But it’s so monolithic, that it defies the quotidian nature of the material.

While much of this show is jaw-droppingly fun, there’s plenty of work that is more subtle and just as interesting. Nava Lubelski’s Crush (2008) is a paper terrain created from cut and shredded love letters received while the artist was coming to grips with his homosexuality. Or how about the strangely beautiful Placebos (2008-09). This work was created by Celio Braga using the prescription-medicine instructions of friends and family.
Thomas Demand’s Shed (2006) was a three dimensional paper recreation of a found photograph, which was then photographed. Olafur Elisson offered Your House (2006), an editioned work of laser-cut, blank pages that created an architectural void inside the pages of a book. Tom Friedman gave us Quaker Oats (2009), which featured hundreds of Quaker Oats boxes. It looked like a frozen, digital effect from the breakfast scene in some sci-fi film.
My pick for best work in the show is Oliver Herring’s Alex (2009). Herring’s meticulous, existential works approach human experience in thoughtful, startling ways. Alex is a haunting work that stares deep into your eyes, searching for secrets.
As the ultimate museum-photography killjoys, MAD doesn’t even allow you to take pictures in the lobby. Which is too bad because the lobby featured Andrea’s Mastrovito’s Nothing Left to Do But Cry (2009), a paper, storm-driven ocean complete with sinking pirate ship all hanging upside down from the ceiling. Amazing.
Oh I know the real art critics like to trash shows like this as too friendly, too forced, too haphazard, too something. But I say critics be damned. Because sometimes, you want to be reminded that art isn’t just for the critics or the billionaire collectors. It’s also for people who want to spend an afternoon at a museum and walk away feeling inspired.
I also say museum photography bans be damned. Thanks to the magic of the internet, I can still show photographs of works from Slash: Paper Under the Knife. Well at least until I get a cease and desist order.
MAD's new building which opened in September 2008 at 2 Columbus Circle. 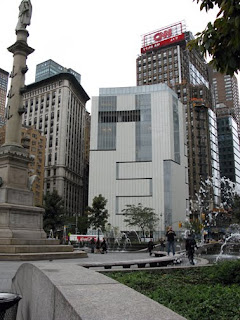 Me trying to take a self portrait in front of the building. 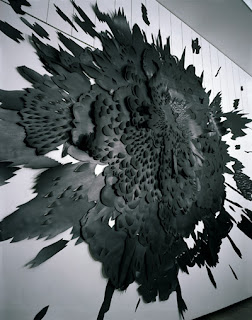 Chris Gilmour, The Triumph of Good and Evil, 2009
Cardboard, glue 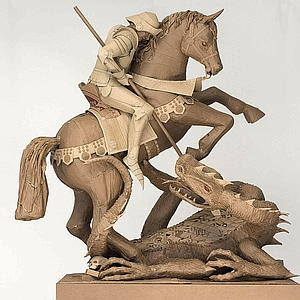 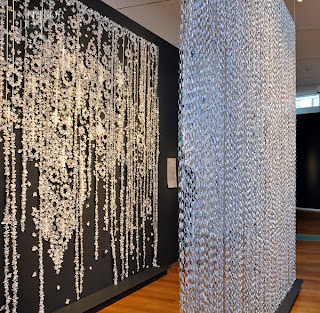 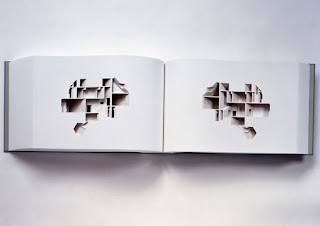 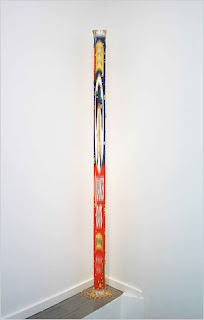 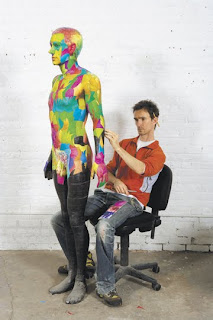