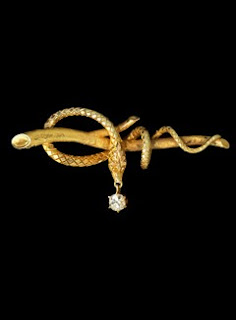 There’s been a lot of press recently about Madeleine Albright’s new book, Read My Pins. And although it may add fuel to the argument that I’m really an old lady (because if there was ever museum show created for old ladies, this is it), I was intrigued. So I stopped by New York City’s Museum of Arts and Design to take a look and the corresponding exhibition.

Although located in a smallish gallery, there was plenty to see with hundreds of pins and brooches on display, many of which were inexpensive costume jewelry. However, there’s more to this show than just a bunch a pins. That’s because Albright used pins as a communication device during diplomatic meetings. It all started a long time ago when Seddam Hussein called Albright a snake. So Albright showed up at her next diplomatic meeting with Iraq sporting an antique gold snake pin (see inset photo).
After that, Albright made a habit of wearing brooches meant to communicate something about her diplomatic intensions. When Albright felt Russian officials were ignoring human-rights violation in Chechnya, she wore a trio of monkeys in classic hear-no-evil, speak-no-evil, see-no-evil poses. When she needed to convey a tough message, she often wore wasp pins to deliver an extra sting. There were pins made from chunks of the Berlin Wall. Pins designed to appeal to children. Pins given to Albright by diplomats and world leaders. Suffragette pins. Crude ceramic heart pins made by Albriht’s young daughter. Even a giant lobster pin that (if I’d been allowed to take pictures) would have inspired a post entitled Art Lobster: Old Lady Edition.
The pins were fun to look at. But the best part of the exhibit was the accompanying stories, many of which were surprisingly emotional. Take the story of a young man who lost his mother in hurricane Katrina. He approached Albright and told her that his mother was a big fan of the secretary of state and that she knew Albright loved and wore pins. In tribute to his mother, he gave Albright a diamond and jewel pin that was given to his mother by his father as an anniversary gift.

Yes, I spent an hour surrounded by women, most of whom were older. But I’m happy to embrace my inner old lady. Because Read My Pins offered a strange mix of whimsy, history, and emotion that made me happy.
Posted by Jeff at 6:24 PM