Dang homosexuals; they're all a bunch of troublemakers. 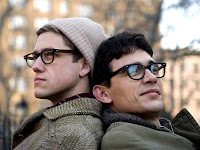 If you were looking to get your gay cinema on at Sundance, Wednesday night in Salt Lake City was your moment, with two films involving same-sex rabble rousers screening simultaneously.  You could go historical with Howl, Rob Epstein and Jeffrey Friedman's bio pic about Allen Ginsberg's poem and the obscenity trial it spawned.  Or you could choose a more current option with former-Mormon Reed Cowen's film about how the LDS church influenced the vote on Prop 8 in California (8: The Mormon Proposition).  I chose Howl, largely because I've grown tired of listening to the gays and the Mormons pick on each other. I think I made the right choice.

Before I comment on the film, I offer this observation.  If you want to clear a theater, don't yell fire.  Just show a sexually charged, gay-themed film.  There was a steady stream of people leaving the theater. And they all seemed a little miffed that they'd just lost $15.
I like this film.  Because it's the kind of film you hope to see at Sundance.  Surprising actors, in surprising roles, telling unexpected stories in fresh, independent ways.   James Franco is intoxicating as Allen Ginsberg. And Mary-Louise Parker's cameo as an uptight English professor is delightful.  Jon Hamm made me nearly shed tears (and I'm not kidding) with his portrayal of the lawyer defending Ginsberg's poem.
This is less a bio pic than it is a film poem, with a wide range of cinematic devices used to tell a gorgeous love story.  The film moves from black and white to color to psychedelic animations and the result is stunning. But what matters most are the words. Whether it's the poetry, the Ginsberg interviews, or the gripping courtroom dialogue, the words in this movie deliver real impact.
There was a lot I needed to hear in this film. Maybe I need to be more open to the ideas of others.  And maybe I need to be more open about who I am.
Posted by Jeff at 10:58 PM