Welcome to the magic of Sundance.

The Sundance Film Festival has returned to Utah.  It opened in Park City last Thursday.  But the official Salt Lake City opening was Friday, with a gala premiere of Get Low, directed by Aaron Schneider and starring Robert Duvall, Sissy Spacek, and Bill Murray.  I also have to add to that list, Lucas Black who was just as good as the big name names.


This is a magical movie. Maybe I just relate to a crazy old man who's never been married, never had children or grand children, and doesn't even know how to "hold a baby."  (OK, I know how to hold baby.)  Or maybe I relate to the idea of throwing a party instead of a funeral.  I've always said my funeral should feature a DJ and a mirror ball instead of flowers and a casket.  But I don't think I'm the only one who loved this movie.


Robert Duvall is brilliant as the crazy old hermit.  And he's matched beautifully by Sissy Spacek's charming widow.  Bill Murray is perfect as the greedy funeral director who turns out to have a heart.  The surprise performance is Lucas Black, who infuses the film with a great big wonderful heart.


But it's not just the acting.  This movie is gorgeous.  The sets are unbelievable.  How did they just find these places? And I still want to how they lit this film.  It's amazing.


The director and three of the key actors showed up for the Q&A after the movie.  Bill Murray stole the show.  He's even better in person that he is on screen.  And Duvall's quiet comments made me respect him even more.


I'm sure this movie will make to theaters.  If you get the chance, see it. 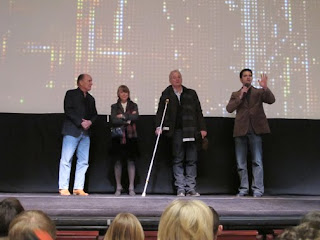 Robert Duvall, Sissy Spacek, Bill Murray, and director Aaron Schneider after the premiere of Get Low at the Rose Wagner Theater in Salt Lake City.