A new pair of art sneakers. 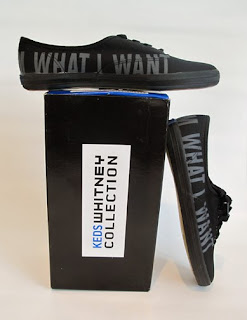 Remember when you were a kid and you got a new pair of sneakers.  And you were just sure they made it possible to run faster or jump higher.  Well I'm enjoying the same kind of excitement with the arrival of my new Keds.  Only instead of running faster and jumping higher, I'm expecting these shoes to make me paint better or write more brilliantly.  That's because these kicks are part of Keds Whitney Collection (as in the Whitney Museum of American Art).  And they are designed by one of my favorite artists, Jenny Holzer.  You may recall that not too long ago, the Whitney presented a show of Holzer's work.
As is usually the case with Jenny's work, the shoes feature words.  These words were taken from one of her previous works: "Protect me from what I want."  I read that originally Holzer wanted to use a different line from one of her art works, "The future is stupid."  But the marketers at Keds felt the line wasn't marketable enough.  So she opted for "protect me from what I want."  Is it just me or does the current line seem like a total comment on our consumption-based society and wouldn't Keds want to shy away from that idea.  I guess it just goes to show that maybe the future is stupid. 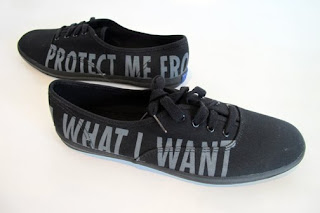