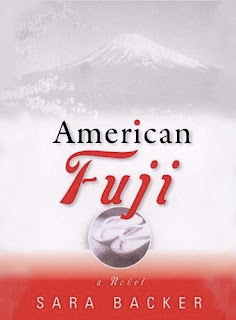 2011 is the year of Japan.  In preparation for my trip to Tokyo in September, I've decided to read plenty of books that have Japanese elements.  I actually arrived at this idea thanks to my good friend Sara.  Her thoughtfulness led her to give me a Christmas gift that celebrated my travel plans.  That gift was Sara Backer's debut novel, American Fuji.  It is a perfect entree into Japanese culture.  It also appealed to me for another reason.  I love reading first novels.  And this is Backer's first effort in the genre.
This is the story of Gaby Stanton, An American woman who moves to Japan to teach English at a university.   She's fired from her job (why, we're not exactly sure) and begins working as a sales person for a fantasy funeral company called Gone with the Wind.
Enter Alexander Thorn.  He's an American writer who travels to Japan for a book tour and stays to learn more about an accident that killed his son.  His son was studying in Japan at the same university where Gaby taught.  There are a number of suspicious circumstances surrounding the death.
Gaby and Alex are thrown together whether they like it or not.  And soon, they begin to have feelings for each other. A situation which results in my least favorite moments of the book.  Several passages in American Fuji might be mistaken for a Harlequin romance.
But beyond the sappy romance, this book delivers a thrilling story with several exciting twists.  And the Japanese characters are fantastic.  Gaby's boss (Mr. Eguchi) is a Japanese gangster whose English skills are limited to phrases he's learned from Beatles' songs.  It's surprising how much you can communicate using only lyrics from the Beatles.  By the end of the book, Eguchi and Alex engage in entire conversations with nothing but the language of the Beatles.
Sure the writing sometimes falters. But Backer's insight into Japanese culture along with a great story make this book a happy read.  Although getting to know the reality of Japanese culture makes me a little nervous about my upcoming trip.  As a foreigner, I'll be a gaijin.  And I expect that on the surface the Japanese will treat me with warmth and respect.  But this book makes me realize that the sentiment may not be honest.  Oh well, I still can hardly wait to experience Japan.  To that, I'll raise a glass and say, "kampai!"
Posted by Jeff at 8:23 PM