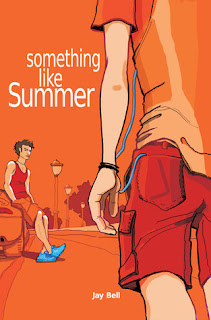 Something Like Summer by Jay Bell is a book that's hard to categorize.  I'm not sure if it's supposed to be targeted at gay teens or to a standard adult reading audience.  Maybe it's a gay coming of age story.  Or maybe it's a cautionary tale about the perils of life in your twenties.  It could also just be a little soft erotica for boys who like boys. The book is very gay, and I don't mean that in the "this-is-so-stupid-I'll call-it-gay" way.  I mean it in the "holy-cow-there's-a-lot-of-gay-drama-in-this-book" way.

In any case, I've read better books that fall into all of the categories listed above.  Don't get me wrong, this is a perfectly enjoyable read. In fact if you're looking for a casual beach read this summer, this isn't a bad choice.  I'd just argue there are better choices.

It's the story of Ben, an out high-schooler looking for love.  He falls for the new kid, Tim Wyman, who seems impossibly straight and impossible to meet.  Turns out Tim's a lot less straight than he pretends to be and soon, Ben and Tim find themselves in the middle of a intimate friendship that will last more than a decade.  Cue the gay drama.

Something Like Summer doesn't quite deliver the story I wanted. The characters are sometimes flimsy, never able to convince you that their intentions are sincere.  The writing frequently gets fluffy and lush, all at the same time, like a same-sex romance novel.  Although that makes for some steamy sex scenes. And the story just suddenly ends with little resolution for most of the characters.

That's the verdict on this book from a 40-something cynic whose view of romance is that of a realist.  So before you decide not to read this book because of my review, you might want to saunter over to Amazon and read some of the reviews written by gay teens.  Because they have a much different view; the inspired view of young, gay romantics who finally see their lives in print. And that alone is worth something.