From San Francisco to Paris by way of Spain. 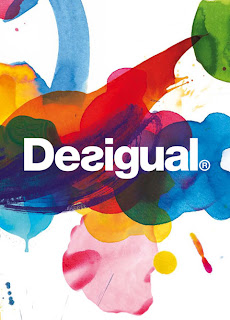 Usually, I write a post for each museum show I visit.  But I'm often surprised how a trip to a city somehow becomes a series of museum shows that all relate to each other.  And that has never been more so than with this trip to San Francisco.  My art experiences on this trip were so interrelated that I've decided to create just one massive post about the whole experience.  And it didn't even start with a museum visit.  It started with shopping.

I'm always trying to figure out who the new, mainstream fashion retailers will be.  With Salt Lake City getting an H&M (which means they've basically become EuroGap), I've been on the lookout for the new, hip global retailer.  And I may have found it in the Barcelona-based brand, Desigual. Unlike other emerging (at least in the US) fashion brands like the UK's Superdry and Japan's Uniqlo which take a decidedly American-sportswear approach to fashion, Desigual brings an un-apologetically Spanish attitude, with lush patterns and sun drenched colors.  Desigual was one of my first discoveries on this trip to San Francisco.  But why would that matter for a post about museum visits.  Because strangely, one of my next visits was to a museum show all about Spanish fashion.

Balenciaga and Spain is the de Young's recently-opened show that tracks the influence of Spanish art and culture on the brilliant haute couture of Cristobal Balenciaga.  After having recently seen the spectacular Alexander McQueen show at the Met, I was worried this show would feel like a bunch of frumpy, old frocks.  But Balenciaga was breaking rules and creating mind-blowing dresses long before McQueen was even born.  And while this show wasn't presented with the attention to drama that I enjoyed at Savage Beauty, it was still brilliantly curated. (Note: I'm stealing photos from the web because pictures weren't allowed from the show.  So these pictures do not represent installation views.)

Take for example, the way the exhibit demonstrated the influences of  18th and 19th Century paintings by Spanish artists like Velazquez and Goya. The billowing, draped silk felt positively royal, both in the paintings and on the mannequins. 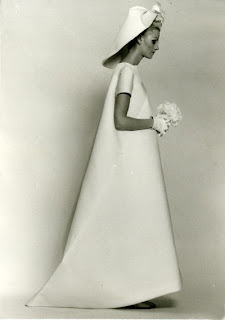 This brings me to one of my favorite things about the show.  Sure there were lots of lavish ruffles, intense beading, and impossible embroidery, but the best dresses were those with a stunning modernity, many almost architectural in their execution.  This doesn't mean they didn't take their references from Spanish art.  Balenciaga embraced many of the more challenging artists of his time like Pablo Picasso and Joan Miro. 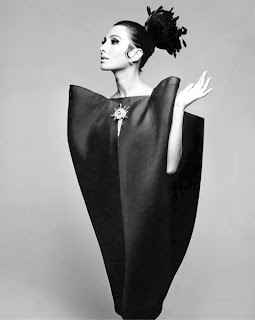 One of my favorite dresses was shown next to a reproduction of a Miro painting that inspired it.  Cocktail Dress (Winter 1967, black silk gazar by Abraham, rhinestones, faux pearls) was so far ahead of its time it feels like a silhouette Lady Gaga might rock on the red carpet.

Another favorite dress that hinted at the work of Picasso was this Evening Dress (Winter 1967, lime-green silk gazar by Abraham). 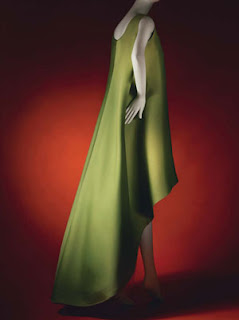 Wouldn't it be great if you could walk out of a show about early Modernist Spanish fashion and see a show about early Modernist Spanish painting? Oh wait, I'm at the de Young, and if I toddle downstairs, I can experience an entire exhibit dedicated to the greatest Spanish master of Modernism, Pablo Picasso.  The show is titled Picasso: Masterpieces from the Musee National Picasso, Paris.  And it's an ambitious effort. I've never been a big fan of early Modern art and I frequently don't get Picasso.  This show did a whole lot to change my mind.  If you go, get the audio tour which is packed with more information than you might want when it comes to Picasso. 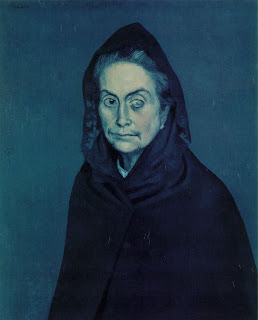 What I didn't expect from this show? The raw emotions inspired by some of the art.  In the first gallery is La Celestina/The Woman with One Eye (1904, oil on canvas). This picture of a poor woman with a severe cataract is from Picasso's blue period.  That phrase used to make me giggle because it's so art-world silly.  But the de Young show makes it seem more logical and provides a framework from which to better-understand the phases of Picasso's career.  La Celestina is down right creepy.  It packs a lot of emotional punch.

I also loved one of the final galleries in the show that featured five bronze sculptures all inspired by the same Picasso mistress, Marie-Therese Walters.  It was fascinating to see Picasso present the same person in so many different ways, from relatively-true-to-the-original to abstractly cubist.  Shown here is Head of a Woman (1931, bronze). 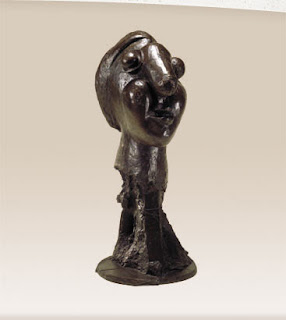 So far, the San Francisco trip seems to be all about Spain and Modernism.  But maybe that theme could visit other European icons, like Paris.  Because the next day we showed up at the San Francisco Museum of Modern Art (SFMoMA) with absolutely no knowledge of what was showing.  The helpful woman at the membership desk asked if we were there to see the "Steins" show because it required timed tickets.  I had no clue what the "Steins" show was, but based on the recommendation of the attendant, we got our tickets.

The official title of show is The Steins Collect: Matisse, Picasso, and the Parisian Avante-Gard (on view through September 6). The Steins were a prominent San Francisco family whose three children grew up and moved to Paris.  The most famous of the group is writer Gertrude Stein.  She lived for much of her early time in Paris with her brother, Leo.  Also living in Paris at the time was another sibling, Michael Stein who lived with his wife, Sarah.  The Steins were early champions of some of the greatest artists of the early 20th Century, including Picasso.

This exhibit is a stunning study in how to collect art, even if you have limited resources.  The Steins seemed to have a sixth sense about the art and artists that would be famous down the road. In fact, some have argued that Gertrude Stein is partially responsible for Picasso's success as an artist. The Steins owned many of the most famous works by Picasso, Matisse, Cezanne, and others. Not only that, but they and their family members were regularly painted by these same artists.  And when these artists became famous and were too expensive for the Steins to collect, they moved on to other emerging artists, helping to create a generation of successful painters, sculptures, and writers.

The Steins regularly opened their homes to anyone interested in the new art, hosting parties for not just the rich and famous, but also the casual visitor to Paris.  Those gatherings were seminal in creating the innovative art scene that invaded Paris.  While much of the art in this exhibit is impressive, the show is most interesting for the way it ties the art to the lives of the Steins.  The Steins displayed their art salon style.  The exhibit shows many early photographs in the homes of the Steins.  You could see a work of art hanging on a wall in the photo, and then see the exact same work hanging on the wall of the museum.

Here's a photograph of Gertrude and Leo Stein's atelier at 27 rue de Fleurus. 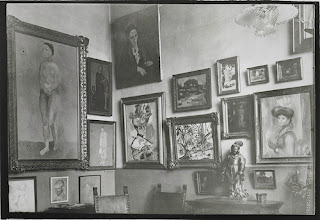 In that photo, you can see both Henri Matisse's Woman With a Hat (1906, oil on canvas) and Picasso's portrait, Gertrude Stein (1905-06, oil on canvas) which Gertrude said didn't look like here.  Picasso's response: "Don't worry it will."  He was right.  Both works (shown here) were on display at SFMoMA. 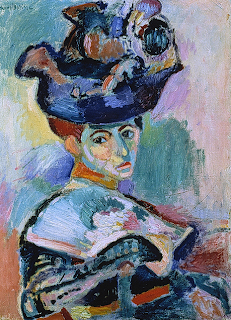 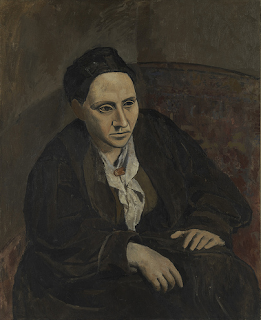 If you're still reading this post, you're thinking one of two things:  "When will it ever end" or "That's an awful lot of retail-art-museum coincidences happening in San Francisco."  If you're thinking the latter, there's even more to come.  Because on my last day in San Francisco, I paid a visit to the Contemporary Jewish Museum to see a show called, Seeing Gertrude Stein: Five Stories (also on view through September 6).  This show explores five facets of Stein's life, from her avante-gard writing to her many friendships with some of the world's most creative thinkers.

Two of the "stories" told in the exhibit stood out for me.  The first was Gertrude Stein's relationship with Alice B. Toklas.  The two women were one of the first openly lesbian couples to take the world stage.  With surprising candidness, they built a home life together that I found charming for its strange and quirky normalness.  Photos of the two at home with their dogs Basket and Pepe, surrounded by art and intriguing objects like a pair of Louis XV chairs upholstered in needlepoint created by Alice, were a happy surprise.  And their talk of being "married" made me realize that same-sex marriage has been an issue for a lot longer than I imagined. You can celebrate the progressive couple by downloading your very own Gertrude Stein and Alice B. Toklas paper dolls. 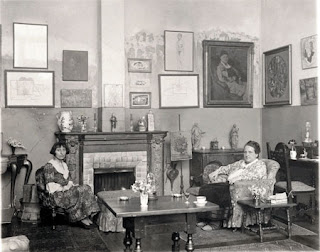 The second "story" that intrigued me was the influence Gertrude Stein has had on the art world, and not just because she helped new art thrive in her own time.  Even now, artists are creating works that embrace the ideals of individuality set out by Gertrude Stein.  One of the most amazing pieces in the show is Devorah Sperber's After Picasso (2006, 5,024 spools of thread, stainless steel ball chain and hanging apparatus, clear acrylic viewing sphere, metal stand). I can only imaging that this reworking of Picasso's portrait of Stein would appeal to Toklas, with it's nod to the wonders of hand-crafted objects created from thread. 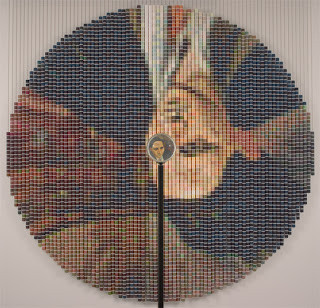