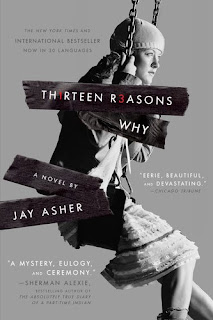 Teen angst and high-school drama reign supreme in Jay Asher's Thirteen Reasons Why.  My opening statement may come across a little flippant for a book about teen suicide.  But I wasn't good at all that drama when I was in high school.  And I find it less interesting now that I'm older and less willing to blame others for everything.

Here's the idea behind Thirteen Reasons Why: Clay Jensen (one of the narrators in the book) receives a box of cassette tapes.  He tracks down a cassette player and discovers that the tapes were created by Hannah Baker (the other narrator in the book). Hannah was a "new girl:" in school who was tormented by her classmates and in response commits suicide.  But before killing herself, she makes a series of cassette tapes that identify people who factored into her suicidal decision.  There are thirteen people identified and the tapes are to be passed along to each person.  If they aren't passed along, Hannah has diabolically arranged for a secret, second set of tapes to be made public.

I did a fair amount of eye-rolling while reading this book.  Hannah would build up the tension and suspense as she neared revealing the next person who ruined life, only to divulge some trivial rumor or the fact that someone hadn't tried hard enough to get her to talk about how she was feeling.  Sure there were a few moments that were serious or emotional.  But for the most part, this is a book about making mountains of molehills.

P.S.  As with book fourteen, you've just read the commentary of a 40-something realist (some might say cynic).  A whole lotta high-school students (and their parents) would disagree.  So lest I discourage you from reading a book that might save a teen's life, consider reading others' opinions about Thirteen Reasons Why.