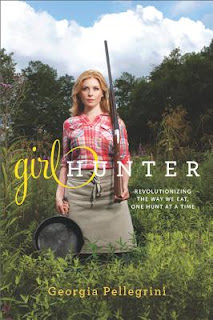 I'll admit it; I read Georgia Pellegrini's Girl Hunter because my niece Maggie is one of my soul mates.  From the time she was born, I've know that she was someone different; someone who would surprise me and the rest of the world.  She's a girl who's been hunting for years now.  And unlike Pellegrini, Maggie (who just recently turned 18) started hunting as a girl, not as a woman. I've been mesmerized by Maggie's fearless approach to life, particularly when it comes to hunting and killing large game animals and then butchering those animals to provide food.  Just this past Christmas, I ate venison hunted, killed, and butchered by Maggie.  Don't go thinking she's some butch-dyke lesbian.  No, she's still a silly, funny teen-aged girl.

With all that, how could I not read a book called Girl Hunter.  Pellegrini is a women who worked on Wall Street.  But decided that wasn't her destination.  So she became a chef.  As a restaurant worker, her chef boss sent her to butcher turkeys.  The experience encouraged her to get closer to the reality of being an omnivore.  So she decided to take up hunting.  This book is a memoir of her game-killing experiences.

I liked Girl Hunter more than I expected to.  Pellegrini is a capable writer who creates surprising tension as she takes you on adventures that involve killing. My pulse often quickened as she took me on her hunting adventures.  I'm uncomfortable with killing creatures.  I don't expect to start killing anything other than the occasional spider or mosquito anytime soon.  But after reading this book I feel guilty about that fact.  Pellegrini makes you realize that most of us are in denial about the food we eat.  Her exciting personal stories (and the recipes that follow each chapter) ask us to be more thoughtful about the animals we eat.

I won't be hunting anytime soon.  But I will think more about what I'm eating and what went into making it so easily available to me. And I'll certainly have greater respect for people like Georgia and Maggie who embrace what it takes to eat animals.