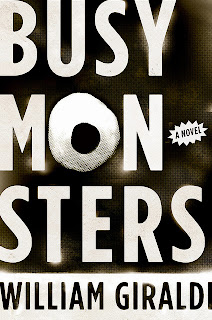 There's a part of me that thinks I should embrace the "Thumper" rule ("if you can't say anything nice . . . ") when it comes to writing about William Giraldi's novel Busy Monsters.  Because I don't have a lot nice to say.  This is a book that's had the critics a buzz, but it didn't do much to inspire me. Busy Monsters is a tale of Ferris wheels and giant squids; aliens and Sasquatch; swindlers and jail birds.  I guess one can look on the bright side; it's a break from vampires and werewolves.

Told from the standpoint of a blowhard named Charles Homar, Busy Monsters is a strange tale that is just a little too strange for my taste.  But I'm in the minority as I've seen this book show up on a lot of year-end, best books lists.

My least favorite part of the book is the dialogue.  The writer constantly reminds us that "nobody talks like this."  I think he repeatedly tells us this to ensure we know that, while the dialogue is painful, the author intends the dialogue to be painful.  I feel like he's trying to ensure that we know it's his way of being clever. But in the end, it may just come off as proof that no one talks like that.

I guess I'll have to agree to disagree with several of my favorite book critics.  Because I just didn't like Busy Monsters.