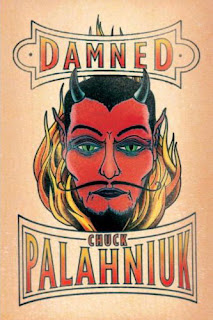 The first I heard of Chuck Palahniuk's latest book Damned was while listening to the NPR Books podcast.  The reviewer pitched this as a young adult book by the author of decidedly un-young-adult titles like Fight Club and Choke.  That's why I'm not surprised that I found this book less than appropriate for most younger readers.

The book opens with a riff on the title/opening line of another supposed young adult novel, Judy Blume's 1970 novel Are You There God, It' Me Madison?  In Palahniuk's take, "God" is switched to "Satan." That's because  the Madison in this story has died and now find herself in hell.

Damned is at its best when it embraces the absurdity of the situation.  Palahniuk's subversive sense of humor left me laughing out loud.  In particular, I loved Madison's relationship with her hollywood A-lister parents who constantly adopt babies from foreign countries and have an environmental concern that is largely a publicity stunt.   That bitter humor is a wicked reminder that teenagers are really funny and fun to be around, particularly when they're pointing out the stupidiy of an older generation.

On the flip side, the angst and drama so popular with the high school set are at least as wickedly annoying.  It's easy to get tired of the teen mentality in this book.

I know I said this book might not be appropriate for younger readers,  But just like Judy Blume's novel, I'll bet there are plenty of teens who would relate well to this cautionary tale.  Just know that this book is filled plenty of gruesomeness, violence, sex, drugs, and other assorted vices. So let teenagers read this book at their own risk.