Charles Saatchi and I have a couple of important things in common.  We're both ad men. He is after all the legendary ad man who created the uber successful Saatchi and Saatchi advertising agency with his brother Maurice.  I'm a big fan of contemporary art, as is he. He's now famous as an avid collector. . . Alright, maybe we don't have a lot in common.  I just can't compete, dang it. For example, he was an important influence in the careers the YBAs (Young British Artists) including Damien Hirst and Marc Quinn.  And he is the owner of London's well-known Saatchi Gallery. I wish I had those things in common with Mr. Saatchi. Nonetheless, how could I visit London and not make a stop at the Saatchi Gallery?

It's obvious that Saatchi is a true "artoholic" as he described himself in the title of his 2009 book. A lot of care is taken in the Gallery to ensure the artists' works are presented in the best way possible, with some of the works impossibly difficult to display.  With that, here are some of the things I enjoyed most.

I've seen Yuken Teruya's work several times before, but it always delights and disturbs.  Teruya takes shopping bags, both high end and low brow, and intricately cuts the silhouette of trees into them. Those silhouettes get pushed down into the bags creating tiny, shaded worlds that are surprisingly inviting.  By using brands like Marc Jacobs, Louis Vuitton, or just plain old McDonalds, Teruya's work also makes a powerful statement about modern consumerism and consumption, all the while subversively reminding us of the natural resources required to fuel our throw-away society.


Markelo Jacome's kite-like structure swirled windily through a large gallery. The whimsy of this work was balanced by the dragon-like terror the work inspired.


Annie Kevans' portraits are powerful and disturbing.  Kevans creates images of the world's most famous and infamous dictators.  That's not what makes them so interesting.  She makes those portraits of the villains as children.  The portraits include childhood images of dictators like Adolf Hitler, Benito Mussolini, Joseph Stalin, Kim Il Sung, and Saddam Hussein. Seeing some of history's most evil men as children is a strange reminder of the potential hidden in each young life. 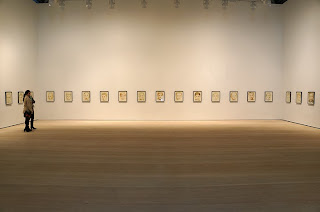 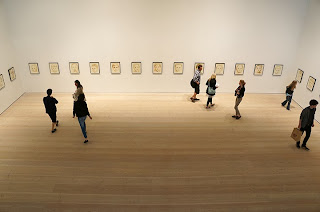 Richard Wilson's site specific installation titled 20:50, 1987, is one of the weirdest works of art I've experienced.  I read about this work years ago and wished I could see it.  It was a surprise to see it installed at Saatchi. The work consists of an entire room filled with used sump oil.  A steel walkway (which was roped off) allows viewers to walk into the middle of the oil-filled room.  In a world that is fueled by oil, this is a mesmerizing, serene work that offers a fantastic critique of who we've become.  Hats off to Charles Saatchi for his willingness to show impossible works of art that remind us of why art matters. 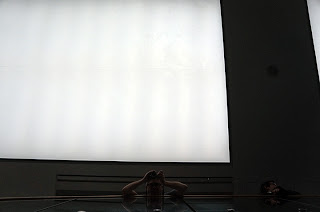 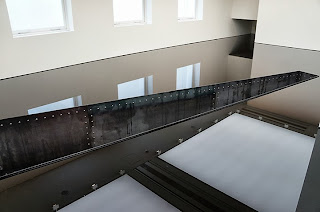