The art of the Christmas stocking: A very Haring Christmas edition.


I've been busy creating my annual Christmas stocking. Usually I don’t post the current year’s stocking until next year.  But since the surprise has already been revealed.  And I’m super excited about the results, why not post it now.  It's Christmas after all.

Just a reminder that you can read all of the official Art Lobster Christmas Stocking Posts here, here, here, and here.

You may recall that earlier this year, I had the good fortune of visiting Paris.  While there I experienced an impressive exhibition titled Keith Haring: The Political Line.  While at that exhibit, I snapped a photo of Untitled, June 1 1984 (acrylic on canvas).   I’ve always been amazed at Keith Haring’s ability to draw a line.  This painting is a fantastic example of how his seemingly-effortless lines can come together to create images that vibrate with life and humanity.  Here is the photo I took of the painting. 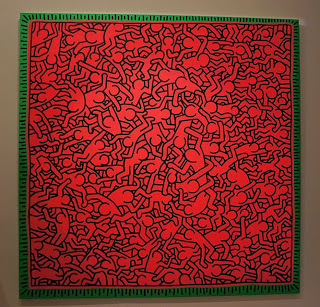 I used this as my inspiration for a stocking I’m calling The Christmas Line. 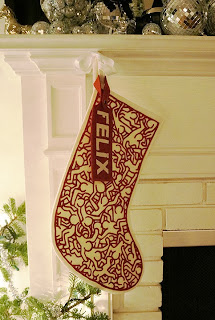 After trying to render them in felt, I now have an even greater appreciation for the fluidity and magic of Keith Haring’s lines.  Originally, I had planned to do several versions of these stocking in a variety of colors.  But after using an Exacto knife to painstakingly recreate Keith Haring’s lines, I quickly determined that wasn’t a realistic use of my time.  So this year’s companion stocking capitalizes on Haring’s Radiant Baby, a perfect theme for the Christmas season. 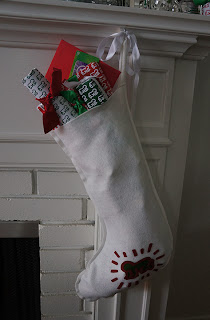 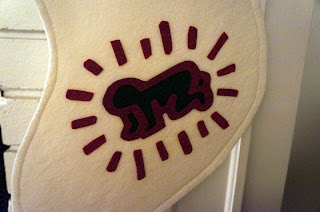 And this year, I was even inspired to create wrapping paper for some of the stocking gifts.  The inspiration came from a massive vase that was on display at the Paris exhibition: 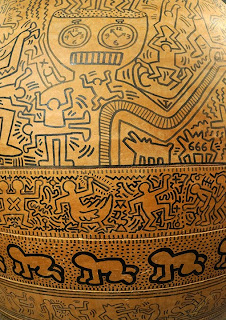 I loved the babies crawling around the lower part of the vase's design.  And it translated beautifully into gift wrap for some very small presents. 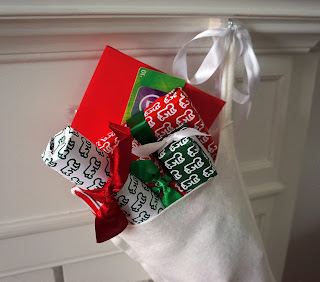 Let's hope 2014 brings more amazing experiences that can be memorialized in felt. And a very Haring Christmas to all.
Posted by Jeff at 1:52 PM