New York in a nutshell.

I had a lot of fun traveling in 2013.  So much so that my posts about some of the best things I did are behind.  I just recently posted about my visit to the Saatchi Gallery, an event that took place last June.  And I haven't mentioned anything from a September trip to New York City.  Well, that's about to change.  On this first day of 2014, I'm combining my NYC activities in a single post.  Which means, it's likely to be a bit long.

Here is a representation of things I did in NYC:

I visited the Museum of Arts and Design (MAD) to see a show called Against the Grain.
MAD has a habit of focusing on a specific material and building a show around that material. The museum has hosted shows featuring art made of paper, glass, and dirt. This year, they set their curatorial eye on wood.  And as usual, the results are surprising, thought-provoking, and just plain fun.  Here are a few of my favorites.

Mark Moskovitz's Facecord (2012, mixed hardwood) is a brilliantly deceptive bit of design. Look closely and you'll notice that this tidy wood pile is actually a domestic chest of drawers.


Ai Weiwei is represented in the show with another of his works that might annoy preservationists. Here, the artist has rendered Qing Dynasty wooden stools useless by clustering them together.


Laurel Roth's meticulously carved and finished skulls are at once kitschy and startling for their beauty.  They are more ominous once you realize that the artist chooses to represent skulls of animals that are exploited for scientific knowledge (as in the piece) or as food sources.

Here's the perfect gift for the art lover/urban farmer in your life.  Hope Sandrow offers Coop LeWitt North (2012, stockade fence pickets, palram plastic sheeting).  Sandrow raises a flock of Padua chickens in Southampton, New York.  Her chicken coop is (re)constructed from a Sol LeWitt drawing from his 1982 series Forms Derived from a Cube.  There were video monitors that provided live feeds from the chicken coop.  For MAD's show, a 3/4 sized version of the coop was on view.

For sheer spectacle it's hard to beat Pablo Reinoso's Two for Tango, Fontainebleau Suite (2012, wood).  This takes the idea of ornate, hand-carved frames designed to embellish great works of art and turns it on its head, making the frame the work of art.


Sarah Oppenheimer used existing architectural elements to great effect.  She cut through the museum walls and lined the holes with beautifully worked plywood.  The result reframed the views of the exhibit.


You can't have a show about wood without showcasing chairs.  But the wooden chairs in this show were far from ordinary.  Two in particular stood our for me.  Christopher Kurtz's A(typical) Windsor Form (2011, steam-bent ash, white oak, pine, milk paint) is a surreal view of chairs that seem to be trying to escape the room.  And I loved Martin Puryear's wooden take on a big, cushy upholstered chair.


The last piece I'll highlight from Against the Grain is Jeroen Verhoeven's Cinderella Table (2005, CNC-cut birch plywood [57 layers]). This work is a clash of technology and artistry.  The table is made with a computer-numbered cutting (CNC) system, the patterns for which were taken from hand crafted furniture pieces. 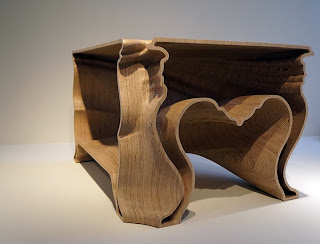 I saw a lot of Broadway shows.
What's a trip to NYC without a few shows.  Here's what I saw:

Kinky Boots.  This show won the Tony award for best musical.  It had the charm, heart, and edge of the movie it's based on.  And it had music by Cyndi Lauper. The movie is still better.  Bonus: I ran into Harvey Fierstein, one of the creators of the show, on our way into the theater! 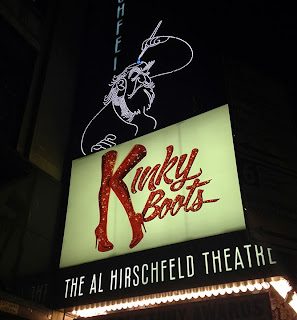 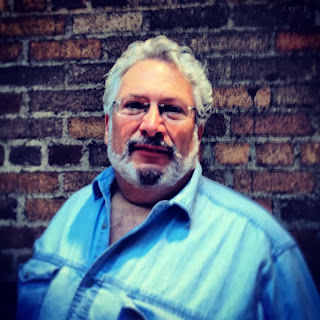 First Date. If you get the chance, you should see this show.  It's unlike any Broadway musical I've seen.  The small cast is on stage for almost the entire show.  And the simple set almost never changes.  And yet somehow, it's as engaging as any show I saw this trip. 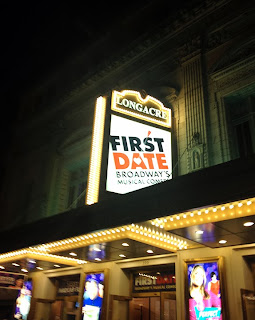 Spiderman. It's as bad as the reviews suggest.  Don't waste your time and money.  Unless you really want to get your photo taken with Spiderman in the lobby. 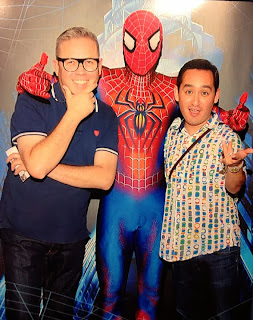 Big Fish. This show was good, not great.  Although we saw it in early previews so I'm sure they've fixed some of the problems. I would assume so since it's gotten some good reviews. 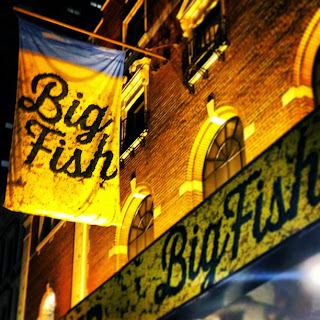 Matilda. The themes that run through this show and the astounding talent of the kid performers is enough to make it a must see for any Broadway fan.  I went to a matinee and Matilda's horrible parents and the evil Miss Trunchbull had an entire theatre full of kids laughing enthusiastically. It was fun. 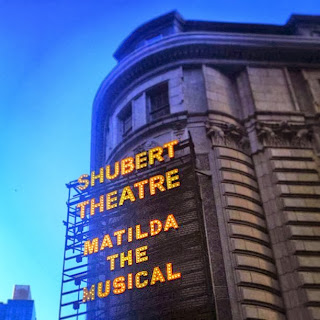 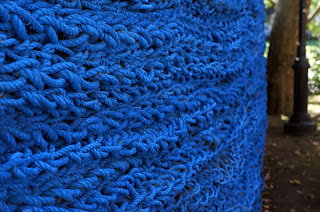 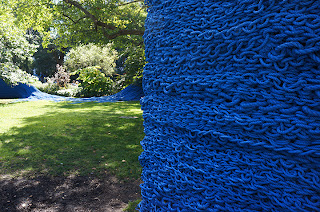 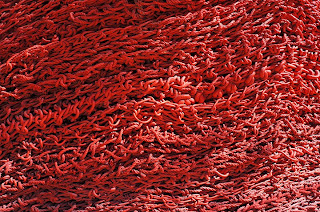 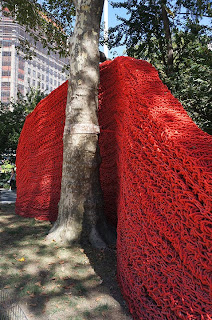 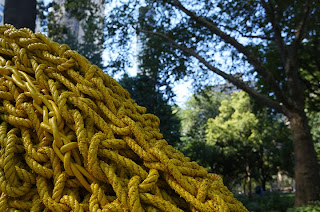 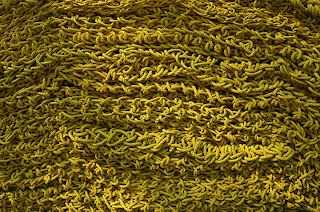 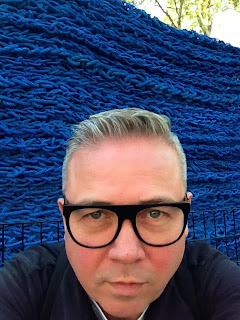 I hung out on the roof of the Metropolitan Museum of Art.
Visiting the summer rooftop installations at the Met has become something of a tradition for me. Past favorite visits include installations by Tomas Saraceno and the Starn Brothers. This year's installation was more somber and unsettling.  Imran Qureshi's The Roof Garden Commission is the first installation that is painted directly on the roof.  It is a mashup of traditional Islamic art and more contemporary action-painting techniques.  The work is a response to the violence that plagues the globe.  The splattered red images are both beautiful for their lovely floral motifs and horrific for their blood-like gruesomeness. 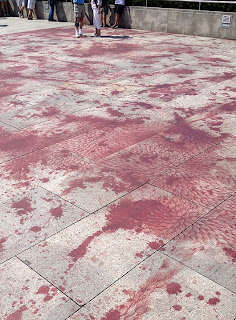 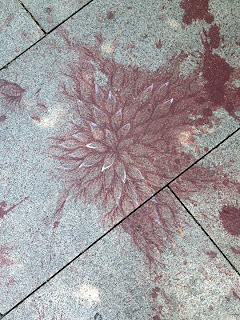 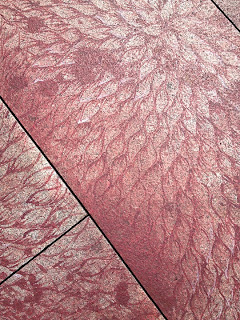 I saw James Turrell's amazing installation at the Guggenheim.
I've long had my eye on James Turrell.  As a fan of earth art, I hope to someday see his ambitious Roden Crater Project, a work he started in 1979 and is still working on.  It is being built in an extinct volcano near Flagstaff, Arizona.  His Guggenheim solo show was spectacular.  The early works were surprising for their simplicity and the effects the artist achieves using nothing but light.  However, the star of the show was a site-specific installation called Aten Reign which radically transformed the atrium of the Guggenheim.  This was pure art-world magic with a gently shifting palette of colored light that mesmerized and enchanted museum goers. 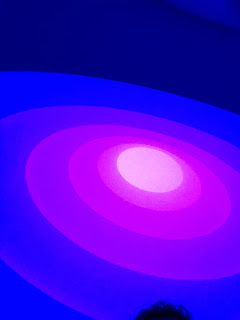 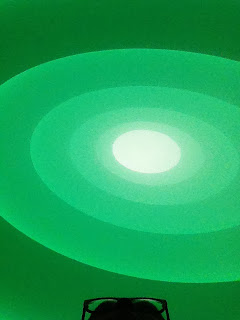 I went to Brooklyn. A lot.
I spent more time in Brooklyn than I have during any previous trip to NYC.  And it was all about spending time with friends, many of whom used to live in Salt Lake City, which made me like Brooklyn all the more.

My friends Sean and Katya took us to their super cool Brooklyn art studio.  As a wanna-be artist, it was a super fun visit.  They also took us to Brighton Beach for a delicious lunch at their favorite Ukranian restaurant, Cafe Glechik.  That was followed by a stroll through Coney Island. 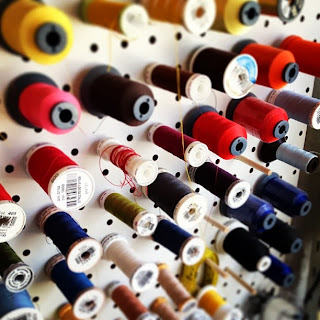 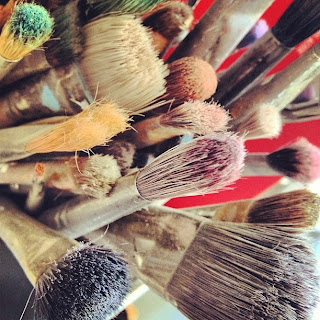 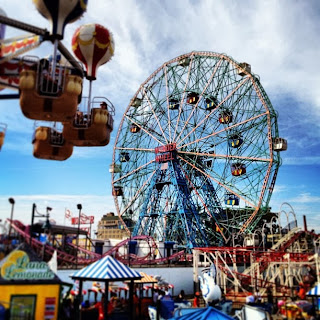 I went to the new Barclays Center with my friends Mariela, Selly, and of course Felix to see Depeche Mode.  And all my pictures from the concert were awful.  So you'll have to imagine the fun and excitement.

Finally, my friend Kara took us to the Brooklyn Flea Market.  There were plenty of fun things to see.  I even bought a collection of strange, European advertising pins. 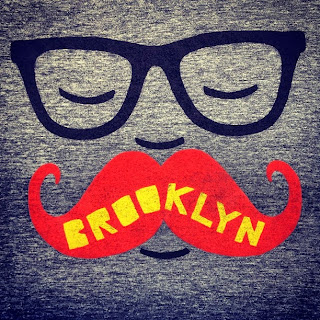 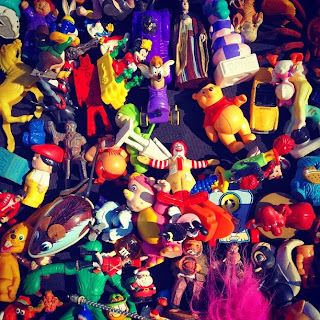 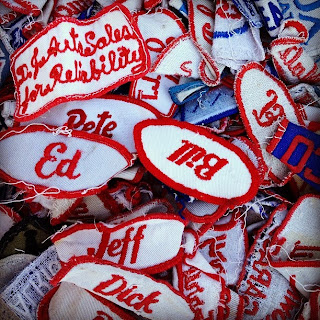 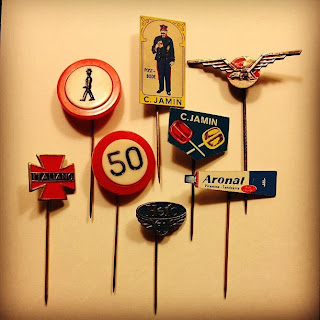 So there you have it: My trip to New York City summed up in a rather lengthy nutshell. Let's hope 2014 brings some equally exciting adventures.
Posted by Jeff at 9:15 PM