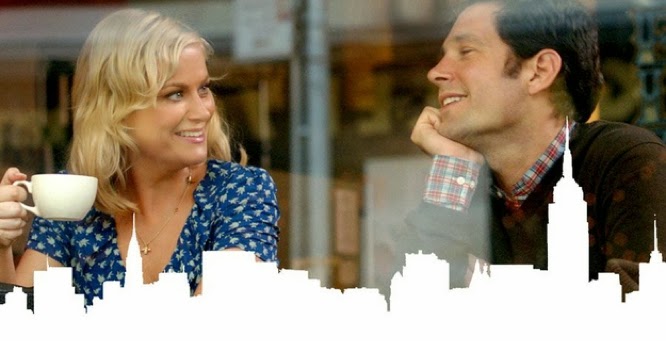 If you love a good rom com, I can't decide if you'll love They Came Together from director David Wain.  Or if you'll be offended by the movie's willingness to roast the movie genre.  Although maybe this isn't a rom com.  Maybe it's a Sunromedy, a genre I created for last year's festival.

Paul Rudd plays Joel, an executive at CSR (Candy Services and Research), a mega candy store.  His company has set its sights on Molly played by Amy Poehler.  She's the owner of a mom-and-pop shop called Upper Sweet Side.  The movie opens as the two are enjoying dinner with friends.  They begin to tell the impossible story of how they met and fell in love.  They note that if it were a romantic comedy it would be the cheesiest romantic comedy ever.

What follows lives up to that promise.  It's  a relentless series of scenes that are goofy, bizarre, silly, and funny.  There's the time when they met, both dressed as Benjamin Franklin for a Halloween party.  There's Molly trying to decide what to wear when Joel shows up unexpectedly at the candy shop; in the end she goes with a suit of armor.  There's that moment, when they just can't control their passions and dive into each other, nearly destroying the apartment in the process. There's even the scene where Joel thinks all is lost and so returns to his ex-girlfriend which results in the most acrobatic make-up sex ever.  (The credits revealed the scene was choreographed and performed by Pilobolus Dance Company!)

Sure, those ideas as written here may not sound that funny.  But in the hands of bunch of goofballs, everything quickly becomes absurdly amusing.  This movie isn't going to garner any credits as an achievement in cinematic accomplishment.  But if you want to enjoy an evening at the movies (and you really want to laugh), They Came Together is pretty dang good film.