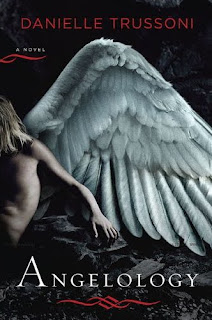 Is it just me, or are vampires and werewolves battling it out everywhere these days.  There's the Twilight franchise.  True Blood has vampires fighting it out with werewolves.  And this summer ABC launched The Gates, TV's newest entry into the vampires vs. werewolves legacy.  In fact, the whole story line has become a cliche.  So if you're looking for something different in a supernatural thriller, you might want to consider Danielle Trussoni's Angelology.  No vampires or werewolves here.  This story is all about evil angels.

This isn't a book that would generally interest me.  I chose it because it got good reviews from some of my most trusted sources.  For example, NPR called it "fast paced" and asked if it is "the next Da Vinci Code."  Now maybe I should have realized that my definition of a page turner, and NPR's definition of page turner might be two different definitions.  Angelology is far from fast paced.  The first two-thirds of this book are drudgery with long, overwritten passages that will tell you loads and loads more than you ever wanted to know about the "real" history of angels, complete with fictional footnotes.  And if there's one thing that bugs me, it's a big, long book where the author still feels the need to provide additional insight through the use of invented footnotes. At other times, Angelology swirves dangerously close to romance novel territory, with language that revels in the romantic notions of angels and what it might be like to sleep with one.

With all my whining out of the way, I'll talk about what I liked in Angelology.  There's a lot to like, particularly if like supernatural thrillers. As you get closer to the end of the book, the writing tightens, the plot gets more exciting, and suddenly you don't want to put the book down.  In those moments, this book lives up to the reviews that suggest it's a great summer thriller.  Unfortunately those moments are too far and in between for me to give Angelology a better review.
Posted by Jeff at 7:54 AM