Take off and landing without the pesky seat belts and tray tables. 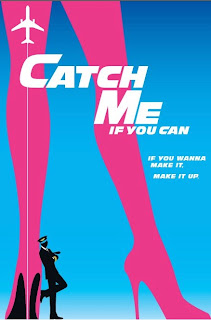 Remember the days when you could smoke on airplanes and sexy stewardesses offered up coffee or tea?  I don't.  But I can imagine what it was like thanks to Broadway's take on a story that's also been the subject of books and movies.  It's Catch Me If You Can now playing at the Neil Simon Theatre and nominated for four Tony awards.

OK, Stewardesses probably didn't have as much sparkle and their skirts probably weren't as short.  But for a Broadway chorus line, I'm not sure you could ask for better inspiration than the stylized travel attire of flight attendants and pilots in the 1960s and 70s.  Add in a few sexy nurses, set the whole affair dancing, and it's hard not to like this stuff.

Unfortunately, Catch Me If You Can is an endeavor in which the parts are greater than the sum.  There are some spectacular production numbers like Don't Break the Rules featuring Norbert Leo Butz as Agent Carl Hanratty and the chorus line which pretty much stops the show.  It's brilliant.  Hanratty was nominated for a Tony for lead actor in a musical.  Aaron Tveit who plays the real lead actor in this musical was not nominated and I think he was robbed.  Because I saw three musicals in three days all of which were about male leads.  And from my vantage point Tveit was the best.  Too bad Catch Me If You Can was the worst of the three shows. Otherwise, I think Tveit might have been nominated.

Yes this show stalls more than once.  But even if it was my least favorite Broadway show of the trip, I still left the theater happy I paid the nearly $150 ticket price.
Posted by Jeff at 10:37 PM

Email ThisBlogThis!Share to TwitterShare to FacebookShare to Pinterest
Labels: Broadway, Catch Me If You Can, Musicals, New York City, Theater