Book twenty-six: A Book of Secrets by Michael Holroyd 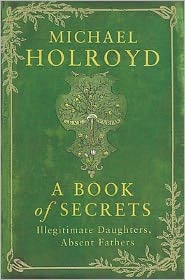 It's not often that a book makes me feel stupid.  But Michael Holroyd's A Book of Secrets: Illegitimate Daughters, Absent Fathers did just that.  After rave reviews from many of my favorite sources, I was excited to read this book about women breaking the rules.  This "biography of sorts" is a devilish collection of complicated connections, academic literary references, and historical associations all tied loosely together by Villa Cimbrone, a getaway home for the rich and famous of Europe located in the Italian village of Ravello.

The book spends most of it's time tracking the lives of four women: Alice Keppel (a mistress of British aristocrats and royalty), Eve Fairfax (a friend of and inspiration for Auguste Rodin), Violet Trefusis (novelist), and Vita Sackville-West (the lover of Trefusis and general bad girl).  And while these women didn't necessarily live their lives at the same time, Holroyd ties their stories together through their association to Villa Cimbrone and through his own personal story and acquaintances.

Here's what I liked about the book.  Learning more about late 19th and early 20th Century British literary society was engaging and surprisingly fun. This book inspires rich, lush imagery.  Holroyd's writing is more than just descriptive, it transports the reader to distant places and times.  I also liked learning about four women of whom I knew nothing before this book; four women who lived their lives in defiance of the cultural norms of their times.  And I like power women.

But as I said, A Book of Secrets made me feel stupid.  I consider myself fairly well read.  But this book made me realize that I'm a long way from accessing literary and historical references with any real facility.  Holroyd's deep knowledge of his subject matter means he can make allusions to other literature and ideas with ease.  Most of those references went right over my head.  Even attempts to figure out those references proved difficult without hours of study.  In fact, I might not even be qualified to write a review of this book.

A Book of Secrets is also sometimes difficult to follow.  As the story travels through different times and places, and interacts with a myriad of characters, it's easy to get lost.

Holroyd is a talented writer and this story is personal in a way that few biographies are.  Holroyd, who is nearing the end of his career, even notes that this is his last book, which adds a strange melancholy to the story. While I enjoyed the writing, the book mostly soared far over my head.  As much as I hate to admit, that may say more about my literary shalowness than about A Book of Secrets.

Email ThisBlogThis!Share to TwitterShare to FacebookShare to Pinterest
Labels: A Book of Secrets, Books, Michael Holroyd