These boots were made for photographing. 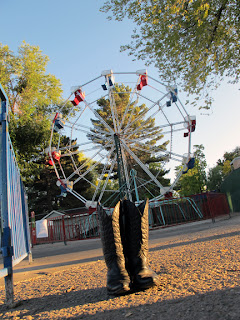 This is the first post in what will likely be a short series.  A while back famed Salt Lake City photographer Shalee Cooper announced a new project call The Heel Toe Project.  Shalee's been collecting and photographing  used cowboy boots for some time.  The results are beautiful.  You can see some of her photographs here.  For her latest project, she's invited people to purchase a pair from her collection.  Each pair comes with a disposable camera.  The goal of the project is "to follow the lives of the boots and the people they accompany through a photographic essay documenting the shared human experience."

Shalee also made three other suggestions:

I was out of town for the original event where you could purchase a pair of boots.  But a few weeks ago, I saw a Kayo Gallery Facebook post noting that there were still a few pairs left.  So I ordered a pair. 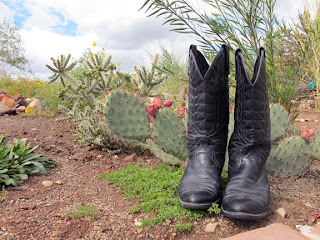 My decision to participate may have been made a little too hastily.  I hadn't given any thought as to how I would participate in this program.  So with just a couple of weeks until the deadline, I was without any ideas.  I started by imagining some bizarre, abstract photograph effort that could only be accomplished with a disposable camera.  But I soon realized the limitations of disposable cameras might make this difficult.

So I spent some time on the official Heel Toe Project website.  And I also reviewed the video and other information on the project's Kickstarter page.  One of the things that inspired me the most, was the reason for Shalee's interest in the boots in the first place.  She saw these worn pairs of boots more as life stories than as objects.  She wondered what life the boots had lived before they came into her possession. 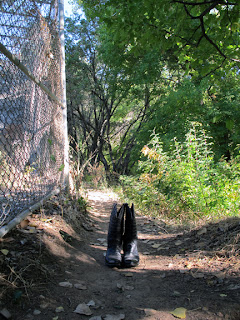 I decided to take the idea of story seriously.  Or maybe not so seriously, depending on how the photos turn out.  I also decided to embrace the disposable camera technology.  My photo essay will be a series of "snapshots" of a pair of boots living its life.  I imaged the boots coming to Salt Lake City for an extended stay, maybe a few months, a year or two at the most.  And yet, before you know it Salt Lake City has become home for more than 25 years.  So consider these postcards from a life at home. 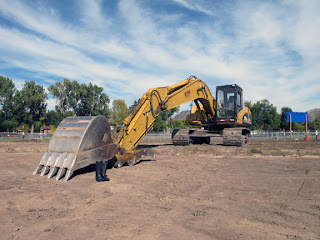 To ensure that I delivered on the three universal experiences (life, love, and loss), I chose eight or nine locations around Salt Lake City that have some sort of meaning in my life.  In choosing locations, I was surprised to find how many of the places that came to mind are no longer in existence.  Some of the places I did visit, I hadn't been to for decades, even though they are very near my house.  They brought back a flood of strange memories.  It will remain a secret as to whether those places are about life, love, or loss.

The photos scattered throughout this post are digital pictures I took as test pictures in hopes that the actual photos might be usable.  I'll post more as I'm sure I'll be writing more about The Heel Toe Project, particularly since the next stop on the path is an exhibition at Kayo Gallery in Salt Lake City on November 18.   With a little luck, one of my photos might be hanging on the gallery wall.