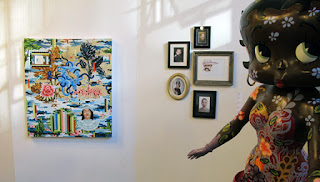 If you want to feel really hip, spend an evening hanging out with a bunch of emerging artists in New York's East Village.  I recently did just that and it was fun. I couldn't help but think about art-historical moments like the shows Keith Haring staged at the Mudd Club or the artists who participated in "Pictures" at Artist's Space in 1977. Here's the big surprise, this just wasn't a show featuring emerging New York artists; there were not one, but two artists who live and work in Salt Lake City, Utah. The exhibit is titled POW: Pop Now and was curated by Sean Noyce, a native of the Salt Lake City area who now lives and works as an artist and curator in Brooklyn. Here is a photo of two SLC artists Felix Flores (right) and Dan Christofferson (center) with curator Noyce. 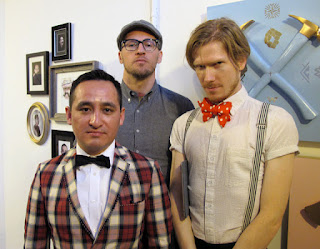 But before we look at the work of these two Utahans, let's talk about some of the other art I liked. Dafna Steinberg hales from Washington, DC and offered a delightful series of collage works with in-your-face attitude and a variety of references that merged Pop with the world we live in to today.  Her work, Little Monster II (2011, collage), also continues one of my favorite art themes; lobsters in art. 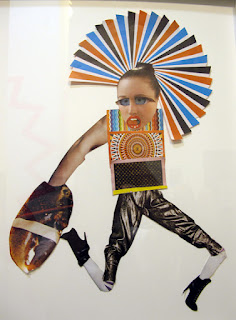 The large paintings by Jose Arenas were lovely and sinister at the same time.  And while I saw pop references, I also saw a lot of surrealist ideas presented in Tempo Completo (2011, oil on canvas). 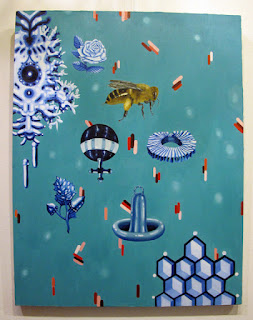 The works that best offered a new take on Pop Art were the fiber works by Katya Usvitsky.  Like much of pop art, Katya reminds us that the immediate world around us deserves more attention than we tend to give it.  At this show it started with a pair of knitted eyeglass frames that were one of the stars of the evening. It continued with her life-size knitted bicycle that invaded the space and forced interaction with the audience. One women was compelled to park her bike in front of the work.  But my favorite work from Katya was a grouping of Poop (2011, hand-knit wool and fiber fil). This took Pop and infused it with themes that have invaded the art world right now; namely what it really means to be alive. It's like Claes Oldenburg collided with Tim Hawkinson. 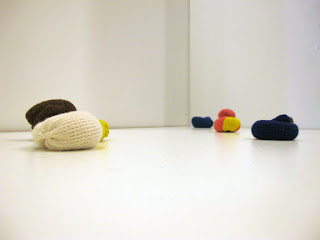 The big surprise of this show may be how well the artists from Salt Lake City showed next to artists from from New York and other major metropolitan areas.  Both SLC artists had some of the most interesting works in the show.  In the spirit of full disclosure, I live with Felix Flores and I was actually around during the production of some of these portraits.  But I still think these images hold up well in a contemporary art context. In a world obsessed with personal identity, these images challenge ideas of reality, particularly when it comes to concepts of ethnicity. What the Curators of POW: Pop Now may not know is that the image of Felix in a sombrero and fake mustache was created to promote diversity in the workplace. After just minutes of being posted it was deemed too controversial and removed. Here's a picture with Felix and all of his work from the show. 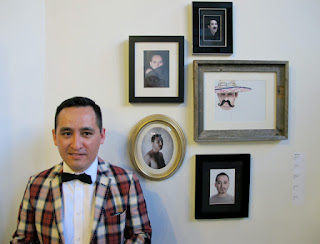 My favorite work from the show was that of Salt Lake City artist Dan Christofferson. There's a lot going on with this Art, particularly when you consider how clean and simple the works are.  This work does what the best art does. It takes iconic themes and twists them into new iconic ideas. Christofferson obviously has a Mormon history. I love how he merges those ideas with Christian imagery that has been around for centuries. I see it as a warning to modern religions to not make the same mistakes that so many Western religions have made. Here's a great example, Our Lady of Moderation (2011, die-cut foil, fabricated hatchets, and installation on painted panel).

Even better are some of Christofferson's candy-colored works featuring tools and symbols. I believe that objects matter in art and these are beautifully crafted objects.  Here is Hatchets (2011, die-cut foil and fabricated hatchets on painted panel). 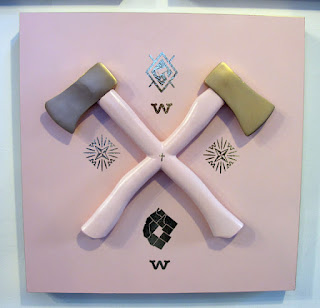 My trips to New York always include visits to the big museums, blockbuster exhibits, and chicest galleries.  This show taught me that maybe I should be paying more attention to galleries that focus on emerging artists. Because shows like this will force me to make judgements about Art based on what I really believe, not what the Art establishment thinks I should believe.