Of wolves, angels, and radiant babies. 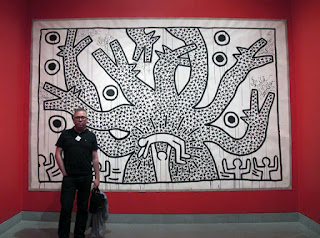 If you want to relive the vibe of the late 70s and early 80s head on down to the Brooklyn Museum of Art for an exhibit that is one of the better retrospectives I've seen.  Keith Haring: 1978 - 1982 is the first major exhibition to focus on the artist's early career, from the time he moved to New York City through the time when he started his studio career and began making political art on the streets.

The exhibit has impact the minute you step into the entryway where you're greeted by Untitled (1982, sumi ink on paper) as shown in the inset photo.  There was also a small row of a dozen or more Polaroid self portraits of the artist all taken during the late 70s and early 80s and tracking Haring's changing styles. I've always said that Polaroids are magical. And in this case they were more magical than usual.  If he were alive, Keith Haring would be just a few years older than I am. And these photographs inspired a flood of memories from those years of young fun.  That feeling of joy and youth set a perfect tone for the rest of the exhibit.

I loved the portions of the exhibit that helped me better understand Haring's methodology which turns out to be surprisingly complex.  For example, early in his career he documented a set of geometric forms that could be assembled in various combinations to create patterns. Here is Haring's Alphabet presented in red gouache. 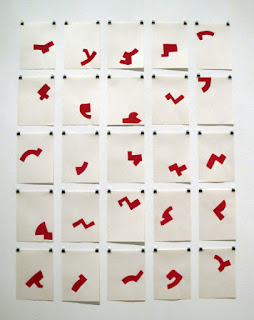 Later in the show you learn that Haring relentlessly practiced his drawing so that he could execute images effortlessly, as if muscle memory would kick in and he could paint with the finesse of a dancer.  That might sound impossible.  Until you see the videos included in the exhibit which will make anyone a believer.  Here is a still from Painting Myself into a Corner (1979, video) which provides an amazing look at Haring's talent. 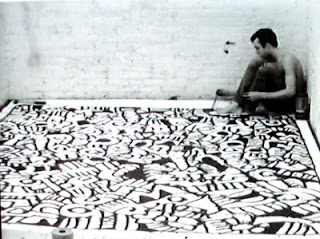 Keith Haring's work undertakes a range of human conditions. Which means his work sometimes feels innocent and charming and other times raunchy and invasive.  Manhattan Penis Drawings for Ken Hicks (1978, graphite on paper) is an example where those ideas collide.  The humor of these drawings makes them almost sweet. The subject matter (penises in various cityscapes) makes them a little wicked with a big dose of humor. 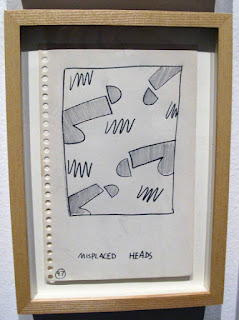 One of the things this exhibit does best is present the subway drawings that Haring created in the 80s.  I can't believe that so many of these ephemeral works survive.  And there are a whole slew of them in this show. Intrusive "graffiti" art seems like it's been around forever.  But it hasn't. Haring was a pioneer in bringing art to the people.  His chalk drawings and black subway papers are fantastic, speaking with a brilliant language of radient babies, angular wolves, dolphins, angels, and aliens.  Here are just a few of the examples on view in Brooklyn. 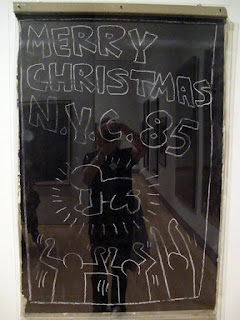 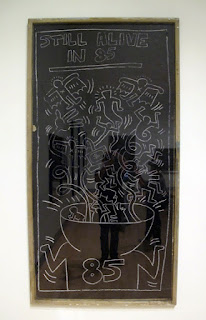 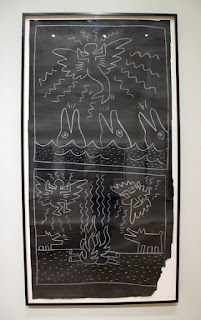 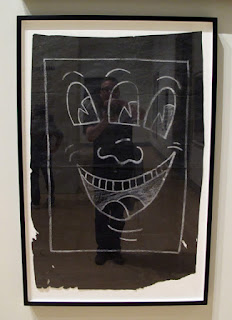 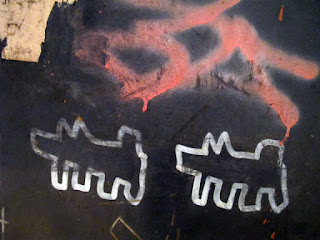 The curators of this exhibit get a hats off for the ingenious ways Haring's work is presented. I loved this wall which features a collection of Haring's hand-made fliers that promote art shows he arranged at places like New York's Mudd Club. These photos show the installation view as well as examples of the fliers. 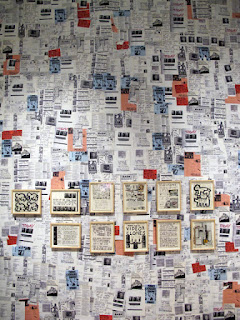 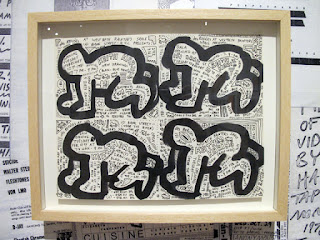 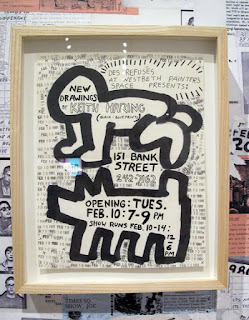 I'm ending with a discussion of my favorite work in the show; Matrix (1983, sumi ink on paper) is a dizzying work that can requires plenty of museum time. This is one time when I wouldn't have minded having a Keith Haring expert around. I wanted to know more about the piece. The ins and outs of its creation. Do the symbols and shapes have meanings? Does it tell a story? But even without the additional information, the is one work of art that delivers a big giant punch of emotional energy. 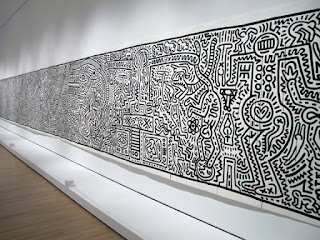 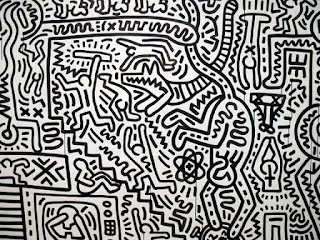 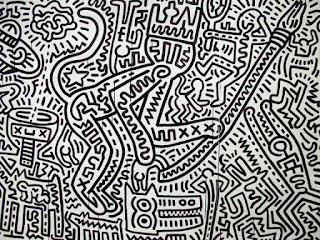 Considering that Haring died so young, it's not surprising that this show sparkles with youthful exuberance and sexual energy. What is a surprise is how powerful these images are and how little they've aged, still delivering impact and emotion at every turn.  It's also amazing how much influence Haring has had on visual languages.  After seeing this exhibit, I saw Haring's influence everywhere as I wandered New York.

It's not often that I just don't want to leave a museum exhibit. But I fell a little bit in love with Keith Haring thanks to the insights and images this show provided. I wanted to linger a little longer.
Posted by Jeff at 4:53 PM