If you love a a charming romantic comedy, but also like the edge of a Sundance film, have I got the movie for you.  In a World . . ., written, directed, and starring the perfectly charming Lake Bell has a wondrous combination of quirky, irreverent humor and pure romantic delight.  It's inspired me to suggest a new movie genre, the "sunromedy;" a Sundance-worthy romantic comedy. I'd like this term to catch on so please feel free to use it liberally.

In a World . . . offers an unconventional story about the stars of the movie-trailer voice over industry. Carol (Bell) is the daughter of Sam (Fred Melaman), one of the greatest voices in all of movie-trailer history. He's set to receive a Golden Trailer for lifetime achievement.  Carol can't seem to break into the voice-over industry but has a knack for accents and dialects so she's struggling to make a career as a vocal coach.  She's currently trying to help Eva Longoria (who is brilliant in this brief cameo appearance) fix a botched accent in her latest film. While helping Eva, Carol is commandeered to record a movie-trailer voice over.  The producers love it and soon she is on her way to becoming the new "it" girl.  She's even being considered as the voice for the upcoming "quadrilogy," Amazon Games.  That trailer will use the storied phrase, "In a world . . .," which hasn't been used in a movie trailer since the death of Don LaFontaine, the legend who first coined the phrase.  While all of the is going on, the awkward Louis (played perfectly by Demetri Martin) is trying to catch Carol's romantic attention. 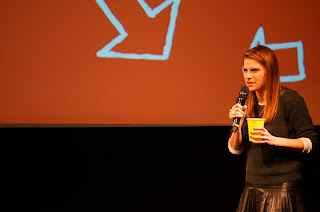 Wow, as I reread that synopsis, this movie sounds stupid.  But in the hands of Bell In a World . . . is a sparkling gem.  She owes a lot to the great performances in the movie, including her own.  In addition to everyone listed above, I loved Michaela Watkins as Carol's sister Dani.  And Rob Cordry is perfect as Dani's boyfriend.  The cameo by Geena Davis certainly doesn't hurt.

Lake Bell attended the screening.  And at the Q and A afterwards she was just as charming, gracious, and funny as I'd hoped she be.  I really hope that all of her Sundance and Hollywood dreams come true.  And I'm sure she'd really be happy if you went to see this fantastic film.