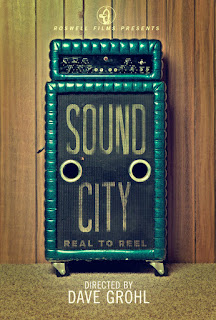 OK, I'll admit it.  I was never cool enough to "get" Nirvana.  Sure I understand their importance in the history of popular music.  But I always thought they were more of a cultural phenomenon than a group of truly talented musicians.  Dave Grohl, in his new documentary Sound City, shattered that perception.  This is another film that fit into my schedule more that it inspired a desire to see it.  But it's a fantastic film about a recording studio located in a rather grungy industrial neighborhood of Van Nuys, California.

Sound City opened in 1969 and after struggling a bit, began to get some attention.  Part of that attention came from the soundboard which was one of only a few built by Rupert Neve.  Neve is interviewed in the film and is every bit the nerdy British engineer you want him to be. The board and the somewhat trashing studio setting came together to create a unique sound that the rock and roll world came to adore. As the studio had early successful albums from the likes of Fleetwood Mac and Rick Springfield, more and more musicians wanted to record at Sound City.

Artists who released albums recorded at the legendary studio include Foreigner, Nine Inch Nails, Johnny Cash, The Red Hot Chili Peppers, Neil Young, REO Speedwagon, Tom Petty and the Heartbreakers, Joe Cocker, and whole bunch of other blockbuster acts.  Many of these acts are interviewed for the film and tell great stories about the time they spent at the studio.  The filmmakers also interviewed Barry Manilow who recorded one album at Sound City.  While he tried to reminisce fondly about the experience, I couldn't help get the feeling that he didn't really like it all that much.

I've largely written off the idea that there's a big difference between analog and digital recording.  Sound City makes a convincing case that there is a difference.  It also makes it clear that there are no digital tricks or shortcuts when you're recording with analog equipment.  And that means, the musicians have to have the necessary musical chops rather than rely on the auto tuning or digital hi jinks.  I might now believe it.

I don't want to give away too much about this film because you should see it and it will be more fun if you don't know all the details.  Suffice it to say that Grohl ultimately gives new life to the legend of Sound City as he creates recordings with many of the studio's original inhabitants.

Grohl wasn't at the screening but Kenny Stoff, the director of photography was.  And while the movie absolutely convinced me that Grohl and his collaborators are supremely talented musicians, Stoff made comments that further elevated my opinion of Grohl. Grohl has refused to sell the movie to a studio.  Instead, he's making the movie available in as many places and ways as possible on Februrary 2.  His goal is to inspire a whole new generation of musicians who rely more on practice and talent than they do on the shortcuts of digital recording studios.  That's not a bad thing to do.