Maybe Art can change the world. 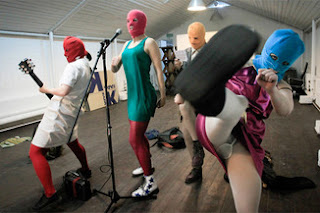 Sundance has done a great job at celebrating some of the world's most controversial artists. The past couple of years we've seen movies that celebrate artists who are making waves in the world of politics.  Last year it was Never Sorry featuring artist Ai Weiwei who's been tormenting the Chinese government for decades.  This year, it was Pussy Riot - A Punk Prayer from directors Mike Lerner and Maxim Pozdorovkin.

The film tells the true story of a Russian feminist performance-art collective known as Pussy Riot, a group that protests Vladimir Putin and his government with guerilla, punk-rock performances. In 2012, members of the group performed at Moscow's most prominent cathedral, criticizing not only the government but also its relationship with the Orthodox church.  While Pussy Riot's previous performances had gotten noticed, this performance hit a nerve that ended in the arrest of three young women.

Pussy Riot - A Punk Prayer tells the story of those three women and the show trial that intends to put them in their place.  In their young twenties, it's surprising how strong and committed these three women are. Movies like this make me question my dedication to my principles.  I'm not sure I have the courage to defend my beliefs in the face of such authoritarian power.  The surprising part in all of this is that the performance in the cathedral isn't really that interesting and was probably a stupid thing to do.  Even the women in the film acknowledge they might do things differently if given the chance to do it over. But that fact can't diminish the power of their actions.

This movie isn't perfect.  It relies too much on television footage to tell its story.  I wish the filmmakers had been involved in the story early on.  Instead, this is a movie crafted after the fact which makes it feel more like an episode of 20/20 than a documentary.  Nonetheless, this is definitely a film worth seeing.  It's a reminder that we can all work harder to make the world a better place.