Love, drama, and an extremely shallow depth of field. 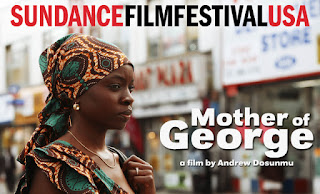 Based on the 2013 Sundance Guide description of Mother of George, I wasn't expecting much from this movie by screenwriter Darci Picoult and director Andrew Sosunmu.  In fact, I only picked up a ticket because I needed to fill out my 20-ticket locals-only package and I didn't see anything that looked any better. But I'm glad I saw this film.

Darci Picoult's story opens with a Nigerian wedding in New York City.  Soon after their wedding, Ayodele and Adenike feel immense family and cultural pressure to have a baby.  But that doesn't seem to be in the cards.  As the pressure builds, Ayodele's mother suggests that her daughter in law go to extreme measures to get pregnant.  Those measures work, but at what cost?

This is a carefully crafted story that offers universal appeal, even as it focuses on a very specific community.  Picoult creates a beautiful story arch about love and the mistakes that are often made in the name of love.  The result is a film with controlled tension and drama that keeps the audience enthralled from the first frame to the last.


Picoult's story is ingenious.  But this movie wins because of Sosunmu and his team.  This is one of the most beautiful Sundance films I've ever seen.  The use of color and pattern is spectacular.  The film is frequently shot through glass or sheer fabrics, giving Mother of George a reflective feel.  And the use of focus and depth of field is stunning. In the Q&A after the film Sosunmu noted that his "day job" is as a commercial photographer.  That made sense as this film has the feel of a perfect photograph.

I can't end this post with out mentioning the ending.  This movie has one of those abrupt, Sundance non-ending endings that usually drive me crazy.  But in the hands Picoult and Sosunmu, an ending that leaves you hanging, becomes a magical contemplation on the future.