I hadn't been to the Utah Museum of Fine Art (UMFA) for a long time.  But now is a good time to visit because there's a lot of new, good stuff to see.  It's been a while since I've seen this much intriguing art at UMFA.  So my next few posts will be about exhibits currently on view.
I'll start with the Trevor Southey retrospective titled Reconciliation. This is a big show with a significant amount of work crammed into the back galleries of the first floor.  But that crowdedness works well for this show. Southey paints with a brilliant technical ability.  But that's not what makes his art great.  There's something more.  His work exudes quiet emotion set against an intellectual intensity.
Southey was born and raised in Rhodesia (now Zimbabwe) and studied in England.  He came to the US in 1965 and received two art degrees from Brigham Young University where he later was a faculty member.  He married and raised a family in Alpine. In 1982, he came out and as a gay man redefined his life.
Yes, my headline for this post may be a bit sensational considering the content.  But I think knowing this background helps inform Southey's art, much of which is religious and features beautifully painted male figures that sometimes have a homoerotic sensibility.
Here are just a few of the works I found interesting.
I loved Irrigation Turn at Dusk (1977, oil on canvas) for it's American Gothic attitude.  In fact, I wouldn't be surprised if this is an homage to Grant Wood, another artist who lived much of his life as a closeted gay man. 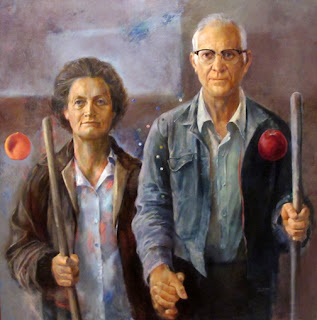 Some of the most beautiful works in the show are the bronzes which seem to make bodies magically float in air.  These works reminded me of Rodin bronzes with a modern twist.  This is Fatherhood (1994, bronze). 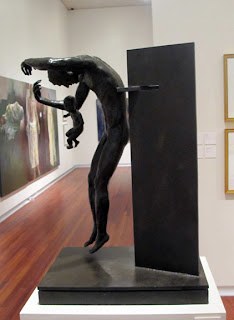 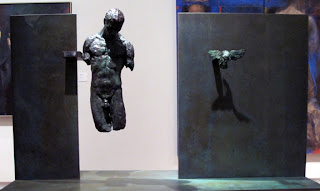 What Trevor Southey does best is represent the male nude.  His canvases frequently feature multiple men painted with surprising attention to anatomy.  But they never feel like academic illustrations.  Frequently the individuals appear suspended in air set amid interesting planes and shapes.  The paintings reminded me of the works of Michelangelo. One of the more dramatic paintings in the show is this large canvas titled, Vyacheslav (1999, oild on canvas). 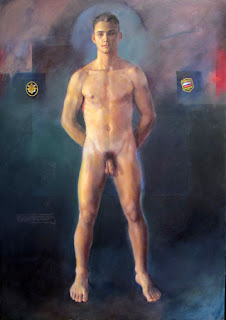 Reconciliation is on view through February 13.