Art in the sky.

In the ultra-modern Roppongi Hills development, there's a skyscraper that has devoted its top floors to art and other wonders, not the least of which is an art museum known as the Mori Art Center.  We rode the high-speed elevator to the 52nd and 53rd floors to pay the museum a visit.

Showing at the museum was an exhibit Metabolism, about a significant Japanese architectural movement that emerged in the 1960s.  I'm beginning to realize that the Japanese approach to museums mimics the same chaotic enthusiasm that makes Tokyo such a fantastic place.  Which means there was a lot of stuff crammed into each and every gallery. 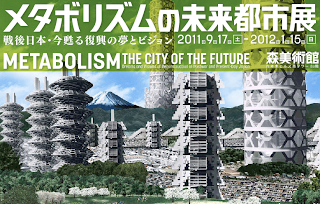 No photography was allowed in this exhibit.  But it was a great, technologically-dazzling presentation with hundreds of cool architectural models with futuristic flair.  One could easily imagine Godzilla trudging through the galleries, destroying all the sci-fi inspired buildings. The show was very Japanese, to the point that I can't imagine seeing it anywhere other than Tokyo.  And it definitely gave me a new appreciation for the buildings of Tokyo.  This was one of the best exhibits I saw in Japan.

Also at the Mori Art Museum was a video installation that I liked.  MAM Project 015 by Hong Kong artist Tsang Kin-Wah offered words of wisdom in a mesmerizing setting.  But rather than talk about it, why don't I just show you a video.

I was prepared for the Mori Art Museum to be on the top two floors of the building.  But there were other things that I didn't expect.  Like the city view that allowed you to see a 360 degree view of the Tokyo.  Here are a few pictures including one taken through a clear aquarium filled with gold fish.  You'll also see amazing views of the Tokyo Tower and the National Art Center, both of which are the subjects of previous or future posts. 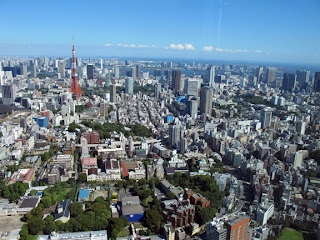 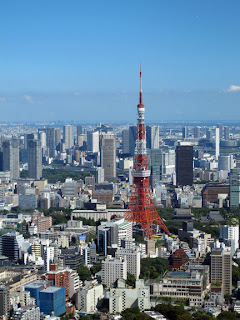 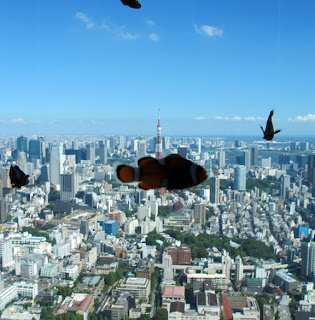 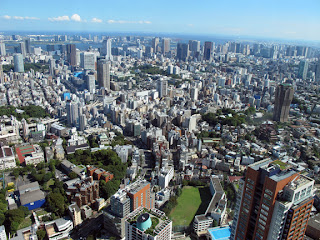 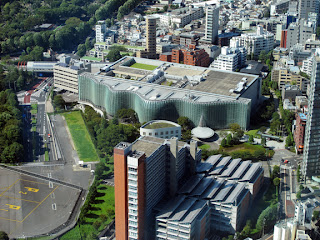 The gold fish are a nice transition to the biggest surprise of the 52nd floor of Roppongi Hills, the strangest aquarium I've ever visited.  The opening gallery featured a Japanese spectacle with imagery projected through walls of aquariums filled with giant koi.  Yeah, it's tough to describe.

The second gallery was a study in color.  The completely black gallery had various sized tanks set into the walls.  Many had LED lighting systems that shifted through spectrums of bright, candy-coated colors.  It's a magical place. 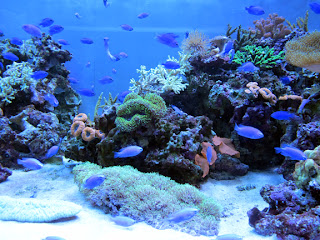 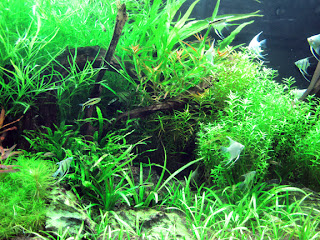 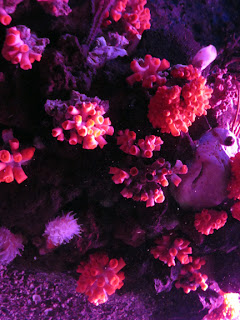 The last gallery was even more fantastical.  I can't describe it.  Watch this video of a place which is so Japanese.

Finally, I have to mention the Roppongi Hills Art and Design Store.  I spent way too much money here.  The Takashi Murakami stuff alone was incredible. 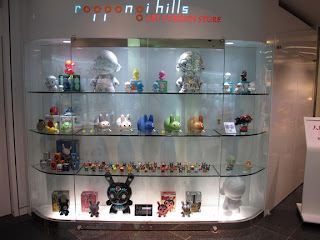 If you're ever in Tokyo, I definitely recommend a trip to see some "art in the sky" at the top of Roppongi Hills.
Posted by Jeff at 7:33 PM