OK, I admit it; I can get a little squeamish when it comes to weird food.  But traveling to a foreign country, I felt the need to try the local delicacies.  I knew when I signed up to stay at a Japanese inn and to enjoy the Kaiseki dinner, that things might get a little weird.  I wasn't disappointed.  Here's the story of our dinner.

First, some info about Kaiseki.  This is a style of food that is popular in the Kyoto region. Like many things in Kyoto, Kaiseki is more art form that just a culinary tradition.  It balances the taste, texture, appearance, and colors of food and focuses on fresh, seasonal, local ingredients.  It's the slow-food movement long before there was a slow food movement.

To be honest, there was a lot of stuff in this meal that I didn't like.  But it was a great adventure that started with a delightful aperitif.  We were asked to turn over some small bowls.  Stuck to the inside of each bowl was a disk of fruit designed to represent the moon in its current phase.  Our host carefully poured rice wine into the bowl which release the fragrance of the fruit.  I have to say, it was a nice way to start a meal. 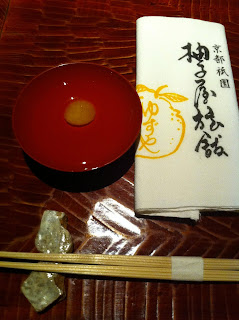 We then ordered a delicious cocktail made with Yuzu juice and some sort of alcohol.  As I mentioned in an earlier post, Yuzu is a citrus fruit that's like a mashup of lime, grapefruit, and tangerine.  It's tart and refreshing.  I could drink a lot of yuzu juice. 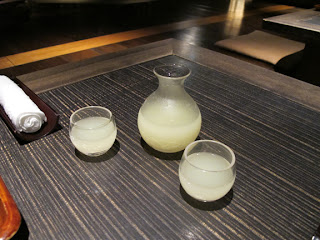 The appetizer was a basket of cooked vegetables designed to give thanks for a bountiful harvest.  It included baby eggplant, pumpkin, a root vegetable that looked something like a small branch, a carrot ball, and a strange potato. 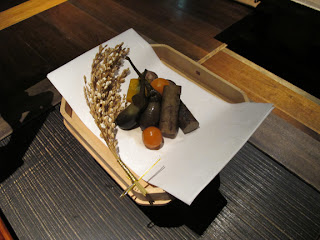 Next came the sashimi course including shrimp, flat fish, eel, and octopus.  Wow, I really don't like raw eel! Actually, the raw fish just didn't do much for me. 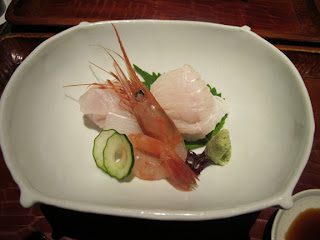 The next course was all about grilled food.  It included a strange grilled fish that was really not to my liking.  I think I may have made a face.  But the grilled barracuda proved to be much better than I expected.  And the steak grill inside a leaf was delicious.  By favorites of the dish were some sort of grilled, salted beans and a strange, tart vegetable/fruit. 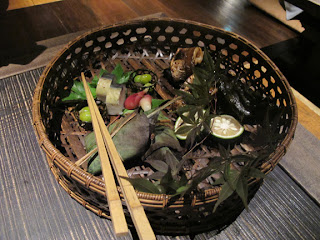 Our host introduced the next course as a "deep-fried," wheat "snack."  It's supposed to represent a dragon head with brown string-like things representing dragon whiskers and the fish at the center representing the dragon's eye.  All I know is that I was really looking forward to "deep fried!"  Imagine my disappointment when this turned out to be a cold, doughy "snack" soaked in a chilled liquid.  No one should ever use the words "deep" and "fried" to describe this dish. In fact "snack" is a stretch. 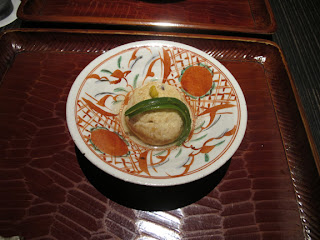 For the next course, our host just started taunting me and my food squeamishness.  This was the hot pot.  It came to the table with a dramatic flourish of sizzling steam.  When it was opened, lovely aromas escaped.  Our host explained that it had the fresh aroma of local mushrooms and crisp vegetables.  That sounded scrumptious! He explained that to start, he would serve us broth with the mushrooms and veggies so we could savor their delicious aromas.  He did that and I took a bite or two.  It was delicious.  Then he said he would add the pike eel.  Cooked eel: not a whole lot better than raw eel.  I stuck to the mushrooms and veggies as much as possible. 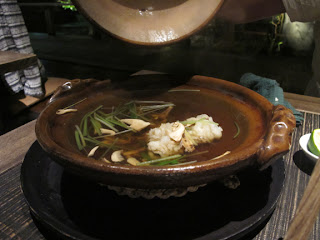 The last of the savory courses was one of my favorite dishes of the whole meal.  It was a rice porridge that arrived at the table in a covered, piping hot ceramic dish.  It opened with a gush of steam.  Into the hot rice mixture had been cracked two raw eggs. The eggs were stirred into the hot porridge, cooking the eggs softly. 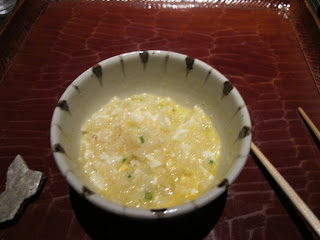 Dessert featured a rice cake (which is really more of a floury jelly), green tea, and fresh fruit served on a bed of ice.  It was delicious.  The icy-cold fresh peach was perfect.  And the humongous grapes were the grapiest grapes I've ever had. 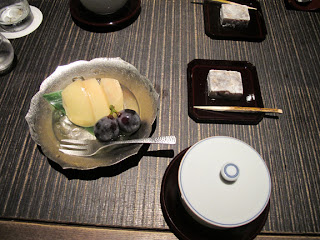 There were a couple of courses in this meal that I forgot to photograph.  The first was a snapper cooked in broth that I liked.  The second was an "special extra" dish featuring sea urchin which takes some getting used to.  In all, it was about ten courses.

This was without a doubt the most adventurous meal I've ever eaten.  And while I may not have liked everything I tasted, it was still one of the best dinners ever.  I'll end with photos of Felix and me at dinner. 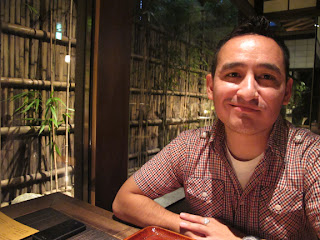 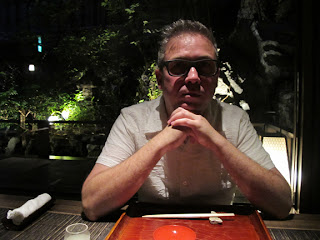