My visit to the Harajuku district of Tokyo wasn't just about the craziness of Takeshita street.  We did some official sight seeing as well with a stop to the famed Meiji Shrine. This grand structure was dedicated to Meiji Emperor and his consort Shoken.  Here's the interesting part; it was completed in 1920.  But destroyed in an air raid in 1945.  World War II was hard on the landmarks of Japan.  However I'm told the reconstructed structure is identical to the original.

This brings up an interesting observation about Japan.  From war, to fire, to earthquakes, to tsunamis, Japan is a country that is constantly being destroyed.  So there are very few structures that are more than a century old.  That means that even though the country feels steeped in ancient traditions, the reality is that it's a country that lives in the now, constantly rebuilding. It's another example of the tension that is Japan: a desire to honor long-held tradition in a place where everything is new, or at least not old.

But that's not what we're here to discuss.  We're here to talk about the Meiji Shrine.  Here I am at the front gate.  And what a front gate?  I love these huge Japanese entrances. 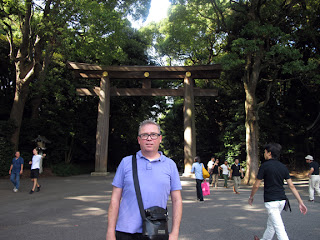 The Meiji Shrine offers plenty of details to catch your attention, some subtle, some grand. 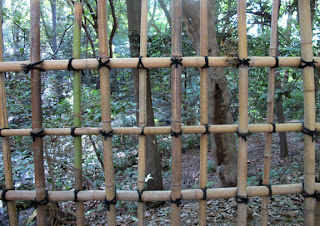 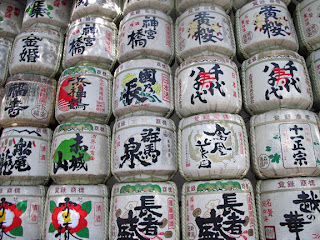 While we were in the main area of the shrine, a surprise procession entered with a fair bit of drama.  I think it might have been a wedding as my guide book said that traditional, Shinto-style weddings are common. 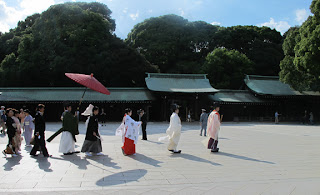 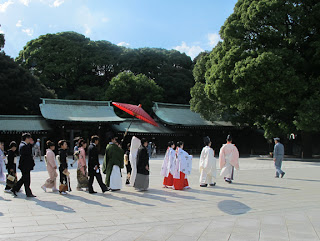 Our visit was cut short (you can ask Felix about that), so we didn't get to explore much more.  But even a brief visit to the Meiji Shrines gives you plenty of respect for the grandeur of Japan.
Posted by Jeff at 6:52 PM