The artist is indeed present. 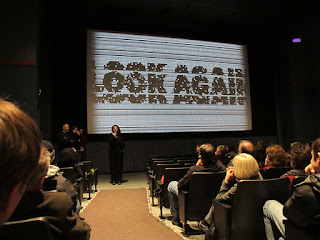 You may recall that back in 2010 I went to see a retrospective at MoMA of the work of performance artist Marina Abramovic called The Artist Is Present.  You can read what I had to say here. I liked the show for the questions it raised about the role of performance art in the greater historical context.  So you can imagine how excited I was when I learned that a documentary about the exhibit was screening at Sundance.

The documentary was almost as engaging as the exhibit itself. HBO has always taken the art of the documentary seriously and this is no exception.  For a year, Matthew Akers and his crew were given access to Abramovic as she planned the show and then executed the performance. The result is Marina Abramovic The Artist Is Present, a brilliant look at the mind of a history-changing artist.

I took so much away from this documentary.  I'll highlight three of those things here. First, this movie reinforces the questions raised by the original exhibition; what is the value of performance art in the entire history of art?  I commented in my original review of the exhibit, "As I've frequently said, 'No one's ever going to have a major retrospective of a performance artist.'  I guess MoMA decided it was time to prove me wrong." The filmmakers decided to really prove me wrong. I'm now convinced Abramovic has demonstrated performance art will exert its importance in art history.


The second thing this movie confirmed for me is how crazy Abramovic's performance at MoMA was.  I thought it was crazy when I saw the work. For three months, Abramovic spent seven to ten hours a day, six days a week sitting still in a chair and looking into the eyes of strangers. I can't imagine undertaking such a monumental task. This movie forces viewers to realize the physical demands required to complete this stunning performance piece, especially for a woman in her 60s.


The third thing I'll highlight from Marina Abramovic The Artist Is Present is the big surprise. It seems like all my favorite movies at this year's Sundance Film Festival have involved surprises.  Having read about Abramovic's work for years, and having experienced her MoMA retrospective, I was sure I had a pretty good idea of what Marina Abramovic would be like in person. This movie shattered that image.  I expected a strict, cold intense persona who would never let her guard down. Turns out Abramovic is an intoxicating, sparkling presence who laughs her way through life. That charm was a devious element that allowed the filmakers to give the documentary unexpected warmth.  When I saw The Artist Is Present at MoMA I took away a message of endurance and an attempt to force the world to slow down. But seeing this film, I realized it was much more. It's a work about connecting with our fellow human beings. About sharing our happiness and our sadness. It asks us to stop, take a deep breath, and look deep into the eyes of someone who might need a few moments of understanding.


I could go on and on about this movie. Instead, I'll suggest you subscribe to HBO and wait anxiously for it to show up on your DVR record list. That said, I can't end this post without one last huge surprise. I've been complaining that at this year's Sundance, SLC has been forgotten with virtually no visits from filmmakers or talent.  Imagine my surprise when, at a screening I was sure would be without a post-film discussion, Marina Abramovic walked down the aisle of the theater and once again engaged the audience. Her charming, passionate, and angry responses to audience questions have made me a believer; the importance of performance art in the art history is now confirmed. 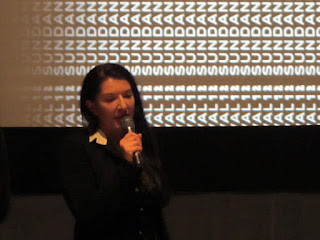 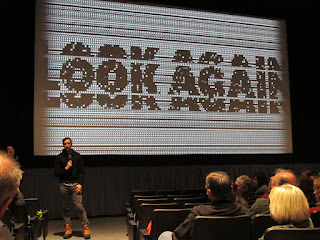