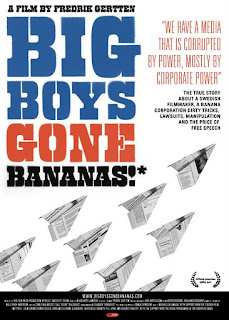 As a holder of a degree in PR, I ask every PR instructor in America to please show your classes Swedish filmmaker Fredrik Gertten's Big Boys Gone Bananas!*. This Sundance documentary may not be the best film at the festival.  But it might be the best case study of what big, American companies should NOT do from a PR perspective.

Big Boys Gone Bananas!* is the story of how Dole reacted to Gertten's earlier film, Bananas which looked at the use of pesticides in the banana industry and how it may have affected workers.  Dole wasn't happy about the film and went after Gertten, the LA Film Festival, and just about anyone else they could think of. With plenty of lawsuits, Dole broke out its legal muscle. Unfortunately, Gertten's tiny film company didn't back down.  The result? Dole comes off as the behemoth corporate entity picking on the little guy, and probably not being terribly honest in the process.  It appears that the company hadn't even seen the documentary in question before they started exercising their significant legal power.

This isn't a documentary that will have you raving as you leave the theater.  But it will have you shaking your head about Dole's lack of street smarts. You'll also have a great deal of respect for Fredrik Gertten and his willingness to play the role of David to Dole's Goliath. That makes Big Boys Gone Bananas!* a film worth seeing, even if you're not in a PR class.