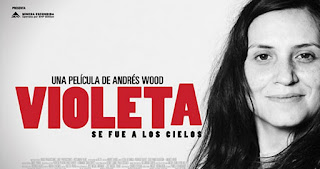 The Sundance Film Festival's dedication to global movies is legendary. That means it's hard to get through a festival without seeing several foreign films. The first of my 2012 festival is Violeta Went to Heaven from director Andres Wood and screenwriter Eliseo Altunaga. This is a biopic about Violeta Parra, a Chilean folksinger and pop icon. She'd qualify in the "national treasure" category for her dedication to expressing the soul of Chile by championing its traditional music. And according to the movie, she also somehow had her artwork shown at the Louvre simply by walking in and asking them to show her work.  Let's just say I'm skeptical about the authenticity of this scene in the movie.

In the spirit of successful Sundance movies (particularly this year), Violeta is a tortured artist and the movies takes us through her trials and travails until she ultimately (SPOILER ALERT) takes her own life.  This is a fine movie. Nothing more. Nothing less. The acting's fine. The direction's fine. I can't tell you what I don't like about it. I can't tell you what I do like. It just seems to be. I wouldn't add it to my Netflix queue.